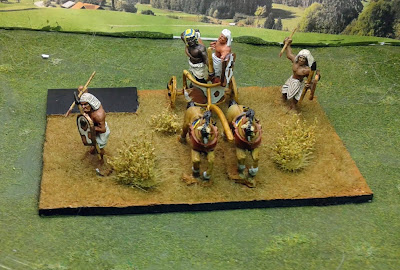 With both jobs on hold while we suspend human interaction (hah! I have been practicing "Social Distancing" for almost half a century.  ..thus this hobby...), there should be enough time to conquer some outstanding projects.  I have a goal of getting the 28mm Kushite Egyptians Project completed by Easter, so I opted to start with the Chariots.  I picked up a three pack of light chariots from Old Glory a couple years back, which would bring me up to four stands in total for the army. They are nicely sculpted figures, and fit well with the BTD skirmishers I use as Chariot runners. 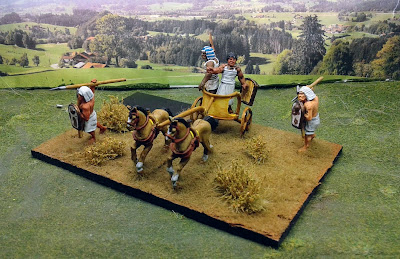 Now that GW contrast paints exist I thought I would try some different approaches to the skin tones for this project.  For the darker skin tones I opted for VJ German Chocolate Brown with a GW "Wyldwood" wash.  It gave an excellent Nubian tone which I highlighted using VJ Oak Brown.  The lighter tones were done with Leather Brown washed in Snikebite leather and Sunny Skin Tone washed with Agrassos Dunes. 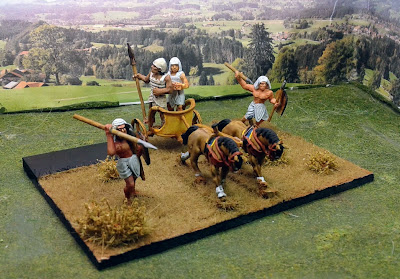 I already have one light chariot done with a 'cattle skin' pattern, so I added one more and then two in a light yellow.

The Old Glory pack came with fully armored warriors which seemed a little excessive for light chariots.  I decided to swap them out with the BTD warriors from my heavy chariots, which really helps differentiate the heavier chariots from the lighter ones on the table. 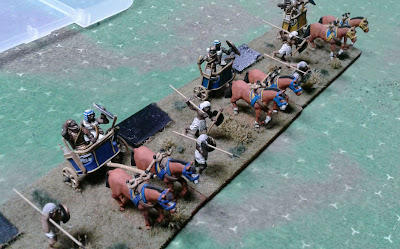 I am also taking the opportunity to fix up the basing for this collection and give them a uniform matt spray to pull the entire collection together.  I have a rather diverse mix of units adding to collection, so perhaps I will have something interesting to throw against Jon by the time he heals up.
28mm Ancients Egyptian Old Glory Miniatures