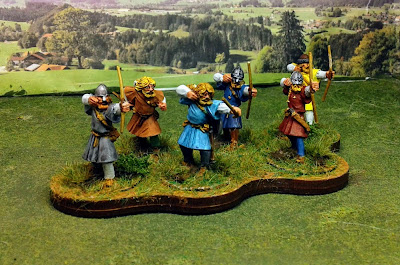 The cavalcade of Dark Age figures seems unending!  I put in an order through Caliver Books a few months back, and took the opportunity to pick up a few packs of Warlord Game's viking range.  Overall they are nicely sculpted, though a bit heavier than the ones from Footsore.  I would put them half-way between Footsore and Gripping beast in terms of heft. 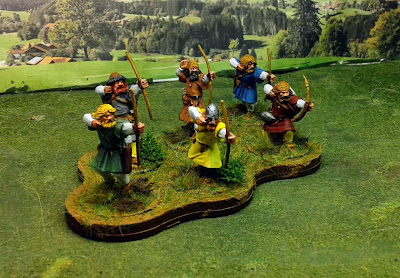 The first pack on deck is the Viking Archers which came in a convenient pack of 12 metal figs.  I was happy to see they were all different sculpts (you can tell the variations on the same base figure, but still a nice change of pace.).  The bows are supplied on separate sprues, which is the only really necessary gluing.  One of them was broken in the package, so it was replaced with a spare plastic fantasy one from the bits box, hopefully not too noticeable.

Time for a temporary slowdown in the Viking department as I have several Skraelings and Samurai who still need attention.  So far I have managed to make a sizable dent in the leftover figures from 2019.  If I am not careful it may be the first time I ever got all the figures purchased in one year actually completed.  (I can already here Morgan Freeman doing the voice over for this one: "In reality he would not be that careful....")
28mm Dark Ages Vikings Warlord Games