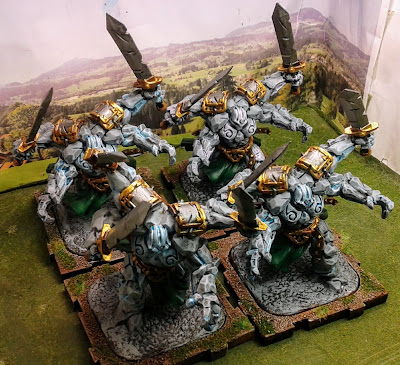 This December 25th marks a year since my son and I were gifted a box of Runewars for the gameroom.  While the project initially generated some enthusiasm in my son for painting his chosen side, that seemed to taper off after the first lonely Spearman.  The lack of a painted army has also seemed to dampened enthusiasm for the game overall.  I managed to finish off the army of the dead last spring, so I decided to give him a helping hand while simultaneously trying our some different paint techniques.  The paint schemes are all my interpretations of those envisioned by the army's owner, which makes for an enjoyable diversion.  I like the idea of painting figures to order, much like I managed with the first set of Frostgrave cultists.

The first of these are the Runegolems.  These are supposed to be animated stone statues with massive swords that glow with eldritch light.  I tried doing two with a black base coat, and the other two with a stone grey chalk-paint.

I used a mix of GW contrast paints and Army Painter solids to give the stone texture.  I have found that the GW Grey makes an excellent wash over the AP Plate Metal Armor to give a more subdued metal look. 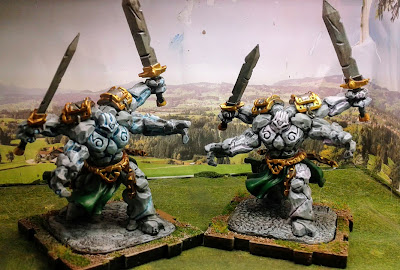 I wanted to try and give them a purple glow as the Undead army was already using a pale blue light for their more fantastical elements.  I found that getting the right mix was more difficult that envisioned.  After some consultation and a test figure, the decision to go with a blue glow for the remaining models was approved. 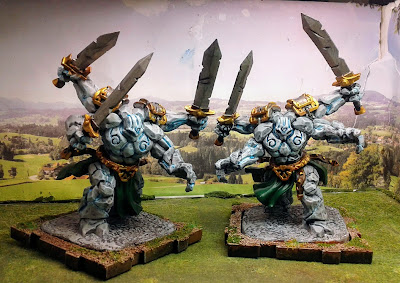 You only get one model in the basic set, but the end of production has made some great deals available on-line.  I have the figures from two boxed sets, and another pair for the Runegolem expansion pack here.  I still have about 40-odd Spearmen to finish as well as the knights.  Hopefully, I can get them in before next Wednesday.