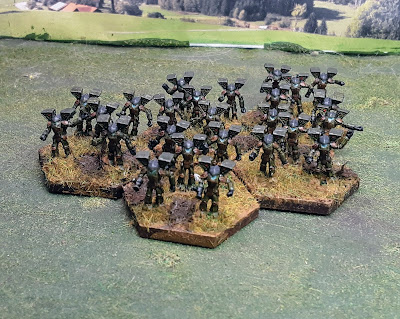 Some small stompy robots to go with the big stompy robots I have been working on in the last month.  These are the old castings for the Clan Elementals from battle tech.  With the recent completion of the Clan Invasion kick starter, I felt motivated to finally complete a "Star" of Elemental infantry to go along with the Clan Wolf mechs I painted back in the late 90's.  I always liked the look of the original Elemental battle armor.  The Squat, toad-like appearance always seemed a little more realistic than the svelte armored figures from other scifi properties.  They look like they are designed to withstand a little physical punishment rather than rely on force-fields or other far-out tech.

I still have another 25 models waiting for their turn (its only been around 20-25 years...), so I suppose they will have to get completed at some point as well.  I pledged for some of the new mechs in the Clan Invasion kickstarter, so perhaps I will paint up the whole group for Clan Smoke Jaguar.  I suppose time will tell.