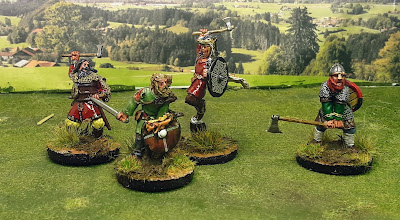 The viking onslaught continues!  This time the last two 'named characters' from Footsore's Berserker collection.  This includes the wounded, but unbowed Magnus Grimface. 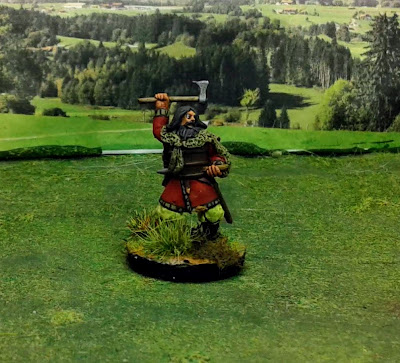 Also Gunnolf Wolfbane a dynamic, well executed sculpt that is an absolute nightmare to try an use for skirmish gaming.  Seriously, I was not able to get a picture with the dullcote applied because he toppled over, again, and separated from his stump and pelt. As you can see below he is modeled leaping from atop a tree stump ready to bring his ax crushing downward. 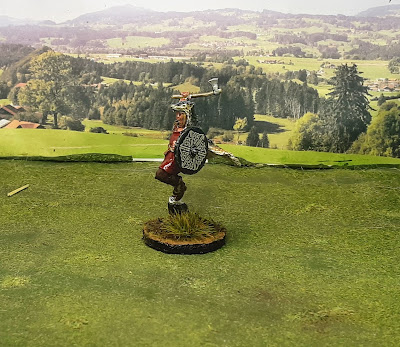 The connection between the foot and the stump is a small peg, and the thickness of the foot makes doing an adequate pinning job difficult.  In addition, his wolf pelt attaches as a cape with a stud and slot along the back at virtually a right angle.  The crux of the problem is that this model is the equivalent to trying to balance an apple on a pencil.  Good for display, but less so if you are using any type of sloped terrain on your game table.  I tend to get these kinds of sculpts in packs from time to time, but it is the prone models that are the worst.  They never seem to fit in with the rest of the unit. 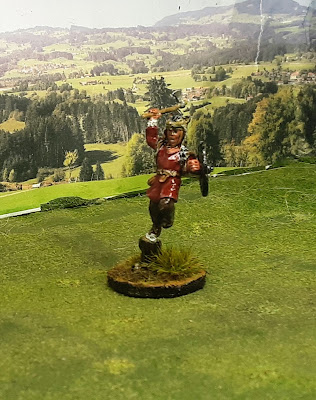 A very nice sculpt, however, but it deserves a much better paint scheme than I gave it to be a display piece.