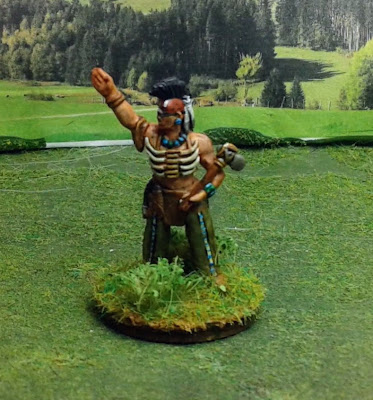 Part of the fun of games like Ghost Archipelago and Rangers of Shadowdeep is that they allow me to expand my collection in new directions with only a few models needed.  I needed to add some "Tribals" to the collection for some of the Ghost Archipelago collection.  Rather than try some fantasy style island natives, I opted to try some of Footsore miniatures "Skraelings"

Although these miniatures are supposed to represent they natives of Newfoundland that the vikings would have encountered in their expeditions beyond Greenland, they seem a little under-dressed for the conditions that far north.  I opted to go for something more akin to the inland woodland tribes farther south.  This has the added benefit of allowing me to stealthily start a 28mm F&I skirmish army without technically starting a new project....

The footsore rage includes one chieftain (above) and packs of four spearmen (w/ shields) or four archers.  The Spears are not included and the archer's hands/bows are a second piece that need to be glued in place. I did not add the shields for the first unit, but will paint a few with the second pack I received.  I only received three bows in the archer pack (something Footsore has already rectified.), but they did inadvertently send me a left hand for one of my Viking figures, which is now providing an improvised hand ax.

Overall a colorful group and almost complete with another 8 models awaiting final completion. 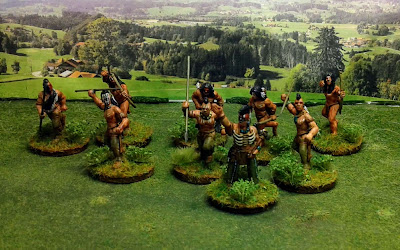