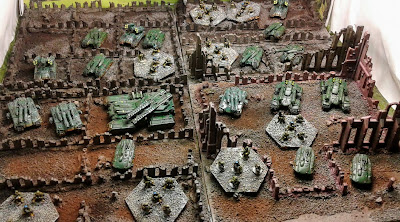 Another side project for the summer is completing these figures for the long awaited Polyversal kickstarter.  (two years overdue and counting)  I originally pledged on these with the intent of playing some scifi games with my son.  Well the interests of my 13 year old are fairly different from the 10 year old I had when I pledged, so I suppose these things happen.

Regardless, the first part of the kickstarter project delivered last month:  The miniatures. are all 6mm figures from a variety of manufacturers. I picked the United Nations faction minis as they looked the most hard-scifi of the group.   I went with a deep green w/ dark gray color scheme basically patterned after the British Cold War era BOAR style. I focused on getting the tanks done, as really what else matters?


The models above are my favorite of the group.  Realistic design with the curved SciFi aesthetics.  Too many of the designs focus on multiple main guns.  Why?  How do you bore sight them?

The wheeled scout vehicles are also fairly nice sculpts.  I see them carrying the light infantry stands as scouts for this group.  I have some old Battletech Battle Armor figures that I may finally get around to painting to serve as the main force infantry.


The AA vehicles look like a cross between a the Soviet 2S6 and the more modern "Terminator" armor support vehicle.  I can see them filling either role.


The super-heavy of the group looks suitably imposing as the 'Maus' of the group.  A nice heavy vehicle to act as a bullet sponge.  Fortunately futuristic tanks never seem to throw a track.  I would love to see the design of the Armored Recovery Vehicle meant to support this thing. 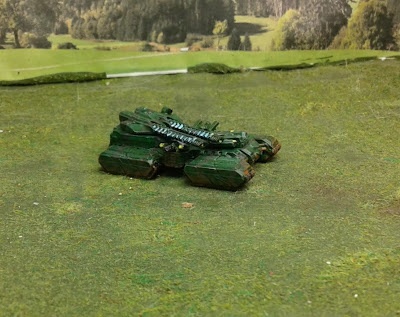 There are some walkers and a drone to finish for this battlegroup as well.  I have a lot of 28mm figures on the painting desk right now, so they probably won't be done until the end of summer.  Not my usual fare, I know, but an interesting diversion.  Plenty of Samurai and renaissance figures on deck however.
6mm kickstarter Science Fiction