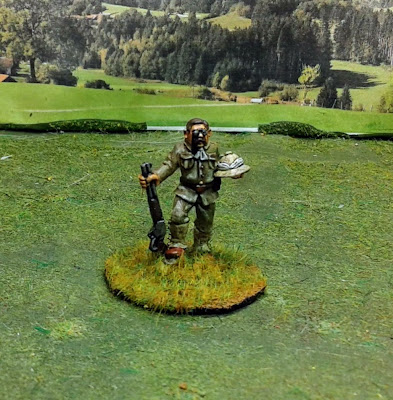 I have been playing around with the new Citadel "Contrast Paints" quite a bit of late, and thought I would share some of my results.  Overall I am very pleased with how they work.  I picked up a red, blue, yellow, green, white, flesh and two brown shades.  They work as a combined base coat and ink wash essentially.  You can put them on over a white or light gray basecoat.  (I have been using a Chalk paint spray that works very well.)  What makes them so nice is how rapidly they fill in the crevices and stain the primer.  I find that I can get a large group of figures basecoated in about the half the time as normal, and I don't need to apply any washes before I start the high lights.

Originally my intent was to see if they would give a fairly good (and rapid) paint scheme for Mason's human army for Runewars.  His interest in painting figures has stalled out, and I thought it might make the process a little less daunting.  nitially I only purchased Basilicanum Grey, Blood Angel Red, Gulliman Flesh and Wyldwood)  I did a test figure with an AP platemail undercoat washed with the grey'.  After that I painted all the non-metal parts with AP Starship White and tried the other contrast paints:  Blood Angel Red for the cloth, Fleshtone for the face and dark brown for the leather components.  The spear was done with 'Snakebite Leather'  The effect on the uniform and gloves was quite striking.  The spear was rather splotchy, so I went back over it with AP desert yellow. 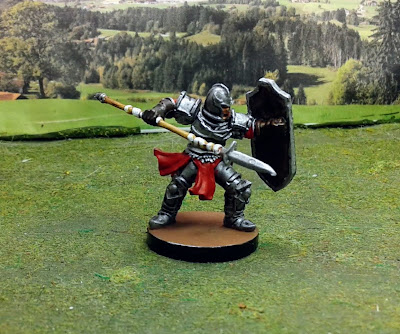 For the skin, I found the best effect came from using AP Barbarian Flesh, applying the Contrast Fleshtone and then highlighting with a mix of the Barbarian flesh and RP Sunny Skin tone.  The shading works very well.

I opted to get a few other colors and try out the paints on some Fantasy figures for our Frostgrave: Ghost Archipelago games as well as try some historical figures.  First up was the Foundry Teddy Roosevelt figure on the top of the page, that has been kicking around the collection for about 20 years now.  Next an old GW Great sword awaiting a second lease on life with my Renaissance collection. 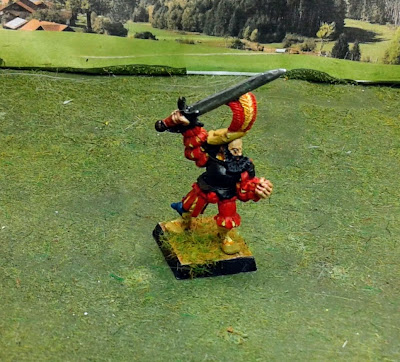 The Blood Angel Red and Iyanden yellow are especially useful as they give excellent coverage and shading for what are traditionally very tricky pigments.

What I like best about them is that I can get a rather decent, table-ready scheme knocked out in an evening.  This is especially useful with the Frostgrave type games that Mason and I have been -playing.  For example we needed a bipedal Elephant-Man for a scenario a couple weeks ago, and all I could find was the Reaper 'Avatar of Rage' at the local hobby shop.  60 minutes on the table resulted in this guy for the evenings entertainment:
Lastly I painted up the Runewars human wizard to serve as a Storm-Warden for Mason's Ghost Archipelago group 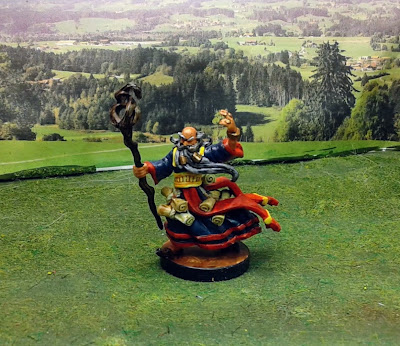 Now I am still looking for good applications for these paints.  One promising one is the rapid coverage they provide for doing cavalry horses.  The pictures below show just a single coat of two different brown shades. 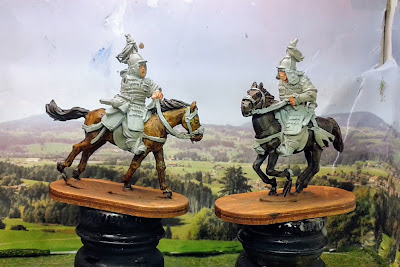 A similar experiment underway with some of my last few samurai figures to finish: 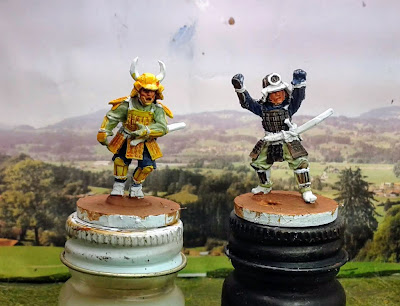 I am fairly happy with these paints, be warned however they are produced by GW so are priced accordingly ($7.50 per pot) Also, you need to be diligent about reapplying the white base over any paint that leaches from the intended coverage point.  They are stains, so one will not cover the old one.  The time savings, however, makes this less of an issue for me.  It is also forcing me to be neater in my painting overall which means less time cleaning up mistakes as I get a model near completion.  I don't think these paints are going to take over my table any time soon, but they do get the initial coat on the figure much faster and help me achieve pleasing results for my table.  Next  up some Spanish American War figures I did as my first whole unit using these paints....