The Fool of Owari 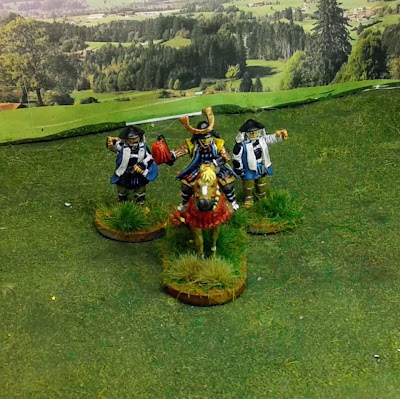 Oda Nobunaga, first of the three great unifiers of Japan.  Also kind of a jerk.  (Both Professionally and personally.)  With all of the Oda Ashigaru coming of the table of late, it seemed like a good idea to finally paint him.  This model is the from the Perry's Samurai Commanders set which includes Oda Nobunaga, Date Masamune, and Uesugi Kenshi (not a bad deal.)

The two standard bearers are actually from the Nanbu Nobunao set, but need new banners.  Oda's standard banners that I can find are a tall Nobori with three coins and a large purple umbrella.  I currently lack the right pieces for that, so I may need to scratch build something in the future. 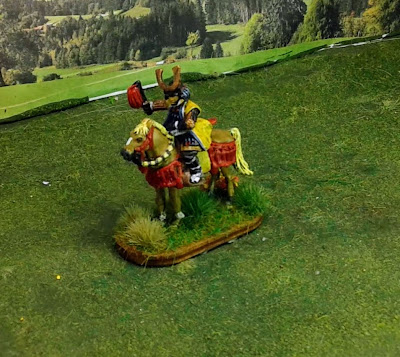 The model itself is fairly well sculpted with plenty of raised detail.  The Haori jacket makes a nice change from the rest of my mounted samurai, and I opted to embellish it with a single Oda Mon.

The biggest difference here is that I have tried moving from black or white primers to a grey primer followed by a blackwash.  I wanted to do a better job of knocking down the bright colors without the pain of trying to put reds and yellows over black.  Seems to have worked out for now. 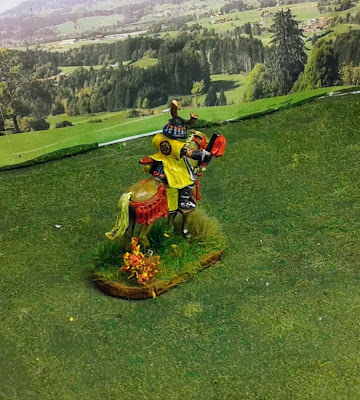 Not as many miniatures knocked out in May, but I managed to get more personality figures completed at least.
28mm Perry Miniatures Samurai Test of Honour