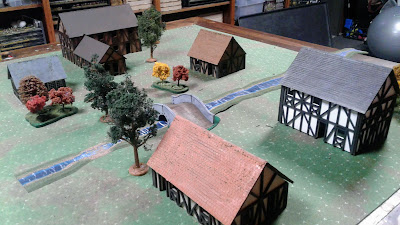 Work continues of my Terrain updates.  This time I have a mix of additions and upgrades.  I put in an order with Warbases a few months ago for movement trays and saw they also offer some precision cut shingles on paper-stock.  They were relatively inexpensive so I ordered several sheets with the intent of improving the look of my Game-craft Miniature's European houses.   You can see the results below


I opted to reinforce the roof pieces with some hot glue prior to adding on the tiles. These were done with a lightly watered down mix of PVA glue.  Once they had dried completely I opted to hit each roof with a different primer color, followed by a healthy dose of Vallejo brown acrylic dip.  That was followed with a generous dose of drybrushing using progressively lighter shades.  Finally, I picked up a tip from a Youtube terrain channel and made 'moss wash' by mixing flock with my PVA/Water mix.  Once the glue dried it turned out to be a rather good imitation of my own roof in later October.

I also took advantage of a sale to purchase some new buildings from Game Craft as well.  This included this small Tudor style building and the larger farm manor.

The Tudor style home occupies a smaller overall footprint than the older buildings, but definitely shows how the company is improving their digital casts.  It includes a fully removable roof, a combination base/floor and detailed windows. 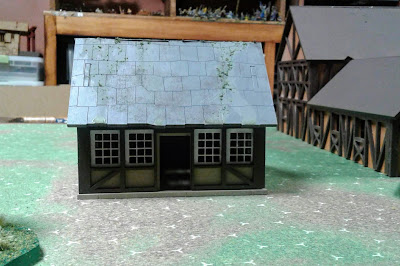 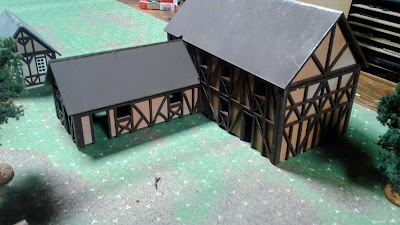 The Farm manor is a much bigger building done in the older style.  There is no floor, and the doors are just wooden slugs.  The buildings assemble quite nicely as the wall panels are separate from the timber detailing.  I assembled the basic building, undercoated it, and then attached the timber frames with spray glue.  I used up all of my available roofing material, so this building will have to wait until I get around to sending another order to Warbases.

Finally, I ordered the new Mountain Village set from Sarissa to go with my Sengoku era Japan project.  Along with that order I opted to add some other pieces like this bridge. 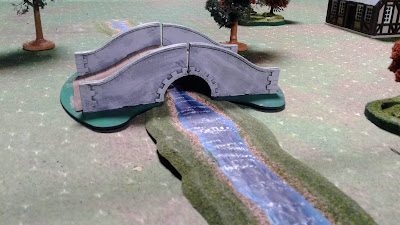 It is fairly light weight as the decking and applique detailing are done on etched paper rather than mdf or plywood.  They are designed to be part of a larger modular bridge set where you can add more central sections. 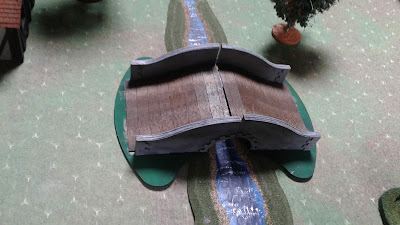 Also in the images you can see my efforts to improve my Tree collection, both my rebasing them on metal washers and cutting some "Tree Holder" bases to denote forest areas on the table.  I cut them to fit randomly inside of 15cm squares, so I can use them readily in To the Strongest! as well. 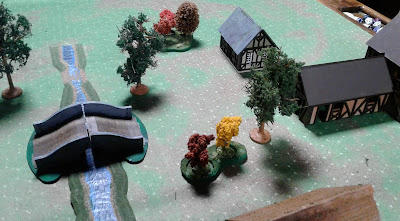