Dealing with my plastic Samurai 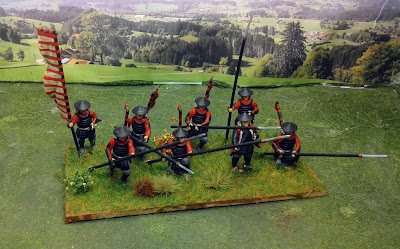 I started my 28mm Samurai project a little over five years ago with some Wargames Factory Plastics.  The project was originally conceived as a skirmish project based around Saga or Lion Rampant.  This was a task for which I found these plastic figures wholly unsuited especially at the hands of a then seven year old.

The problem is that the fragility of the models makes gaming with them an exercise in frustration, as there are always components falling off or being snapped off through less than careful handling.  I have since transitioned over to using primarily metal castings which has ameliorated the problem to a great degree.  (I still prefer the plastic Spears to the soft metal ones provided with Perry minis)

The question then became what to do with the existing models that were clogging up my display shelves.  I originally considered selling them off, but the fragility of  the models would invariably lead to crisis on the part of the receiver.  That and you are always rolling the dice when you sell painted miniatures.  Sometimes it works out fine, other times you discover you have agreed to a sale to a hulking man-child who's only validation in a cold and uncaring universe is his ability to make increasing demands and howl in dissatisfaction at the smallest slight in his perceived need for perfection.

The second option was to expand the units to 12 models each to go along with my changes for the Imjin war project.  This had the double issue of 1) Needing to assembly more plastic minis and 2) Needing to match paint schemes.  I have more than enough plastic minis to round out the existing units thanks to Test of Honour, but the idea of revisiting these schemes I painted so long ago is less than attractive. 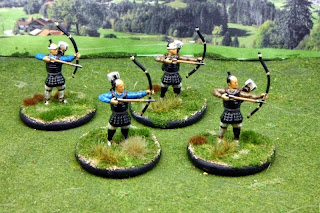 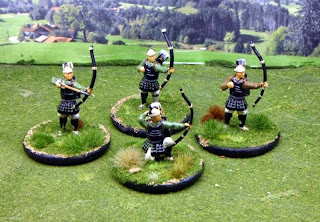 Thankfully, a third option appeared thanks to the Warbases Impetus Movement Trays I picked up for use in Impetus and To The Strongest.  These are pre-cut sabot bases that fit 8 25mm rounds.  Thus my double units of 24 figures, not fit readily in three sabot bases for non-skirmish games.  Since my original plastics are arranged into 8 model units, I opted to simply cut them free from the larger 1.5" bases and combine them together onto a single ply-board 120mmx60mm unit base. 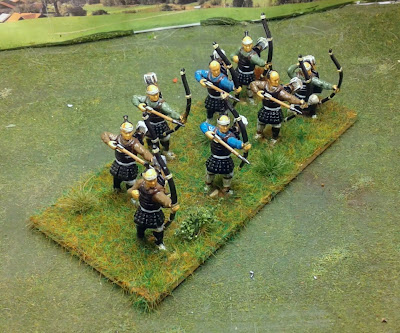 Thus, my Impetus forces are receiving significant reinforcements and I can burn less time fixing miniatures.  I have re-purposed the old stands for the Bamboo forest, and the grass-tufts have been used to augment the new unit bases and cover up the broken legs from the more stubbornly attached plastic minis.  I also found that hot-glue does an excellent job of attaching thin plastic feet to wood.