3 months into 2019, so let's see where we are with respect to my annual goals.

Overall production has been very good for the snowy, work indoors months.  I tend to crank out a lot of figures in the winter in early spring followed by tapering to almost nothing over the summer with a resurgence in the fall.  With that, I know my numbers tend to spike high in the first quarter granting me the delusions that perhaps this year I will surmount the lead the mountain.  A quick look at my desk (above) and queue (below) table says otherwise however.  The current talley sits at around 62 units/projects completed (around 1600pts) with a near even split between 10mm and 28mm models.

My primary goal for this year was to restrict my new purchases by tying them to completion of what was already on-hand.  This was helped substantially by the arrival of two kickstarters from 2018, along with my cache  of 10mm SYW figures for that ongoing project.  Thus we are looking fairly good so far with 88% of figures being existing models rather than new purchases!  (It'll never hold...)


So where am I with the Individual Project Goals

Progress has been excellent here so far with 28 units completed.  There are more than enough units to fight most of the battles I want to run, and I have only three more light infantry units and some command elements to complete for the year.

10mm ACW - One unit of Union Cavalry completed.  I have paired down my expectations a little bit with a review of the OOBs for the games that interest me, so there are only about 3 more Cavalry regiments to go along with the dismounts.  For the infantry I just need to round out a couple of existing regiments and then do the Iron Brigade.


28mm Koreans - Although not completed in the 1st Quarter I have two regiments of heavy infantry completed and 12 cavalry on the paint stand.  I found another 6 swordsmen in the lead pile that I may slap some paint on, but otherwise this group is looking fairly solid.  I am planning on trying them out using To The Strongest! later in the year.

28mm Samurai - I tend to paint these hand in hand with the Koreans and this year is no different.  I continue to whittle away at the skirmish figures for Test of Honour, but the real focus has been on building up a contingent for the Oda clan.  I have painted so many Sohei and Ikko Ikki that is seems remiss not to have Oda Nobunaga represented in the collection to confront them.


28mm Cold War - My 1st Chechen War mini project is nearly complete with the Chechen fighters in the process of basing (below)   There are only a few dozen models overall, and I am not sure when I will get around to ordering some more.  Perhaps if they do another kickstarter?


Other stuff - I was able to complete a smattering of support units for my 3mm Cold War project as all of my figures for the Runewars Miniatures Game.  I picked up Rangers of Shadowdeep to hopefully spark a little interest in getting some short term painting done with my erstwhile opponent.  The game itself is actually quite entertaining, and most of my recent mini purchases have been small packs of Reaper plastics to fill in the blanks with the monsters and tabletop furniture to liven up the game.  (Substituting Korean heavy Infantry for Gnolls can only work so long.)

This has prompted me to finally decide on my next project for 2019:  Terrain. I need more of it, and I want it to look at least unified and clean.  Most of my set-ups appear to be a hodge-podge of stuff from different sources.  Fortunately I am still finding ways to adapt my Geo-hex terrain to get my basic landforms  The goal is to focus what goes on top of the ground to include:

Battlemats:  I took some time over the weekend to spruce up a couple of felt mats.  I cut one to 4'x6' and the other to 3'x3'.  Each got some new paint colors and some spots of flock and sand.  The overall effect looks good as you can see below.  The larger one is going to be gridded off to try a few games of To the Strongest! 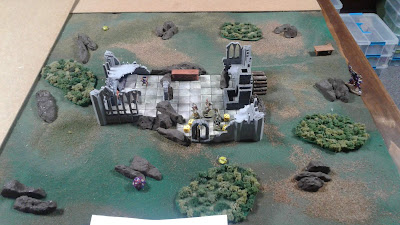 I have a mix of neoprene, felt and cloth mats.  At the end of the day, I think the neoprene works best because the weight allows it to lay flat across the contours and resists wrinkling.  They are expensive, but I would like to find at least one double sided one that would work for 'green world' and 'brown world'

Trees and shrubs:  I need to add some bigger trees for 28mm gaming as well as reinforce the old foam trees.  Most of my trees come from Woodland Scenics and are really showing their age.  I also tried cutting a few custom forest bases using my scroll saw with slots to put the trees into.  This should help keep them upright and delineate a copse from a forest.  I also decided to replace my felt forests for micro scale gaming with wood based ones.  You cane see the first four in the above picture.  I used them as areas of rough ground for a 28mm skirmish game, but they work quite well as woods for 3mm and 6mm.

Scatter terrain:  I have a lack of rocks and other tabletop detritus.  I need to pick up some more materials to use as barricades, ruins, farm equipment, etc.  Stuff to provide some additional cover in skirmish games and visual interest in large scale games. 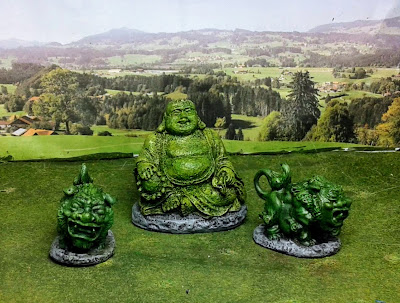 Housing:  This is the big part of the project.  I built a ruined cityscape in 20mm back in 2000 for a 4x6' table that is now in disrepair.  I have plenty of buildings for 6mm, but not a lot of cohesive looking models in 28mm.  I plan to expand first in two areas in 28mm: Central Germany and Sengoku era Japan.  European style buildings tend to work well for the last few centuries and can always be aged forward or backward with the appropriate scatter terrain for an era.  Samurai have become my favorite scale to paint in 28mm, and lend themselves well to very neat 3' square terrain boards.

So there is the year so far.  Now to see what gets done by the June slump.
rants Year in Review