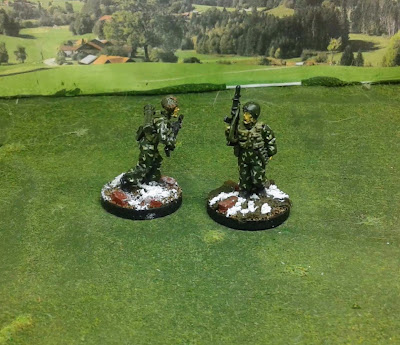 More Russian infantry from the Chechen War collection.  The models come with an array of field kit and uniforms, so I opted to use of mix of Soviet era TTsKO pattern camouflage for the two piece uniforms and "Sun Bunny" pattern KLMK  for the 1 piece combat suits.  There are three different types of helmet sculpted for the models including a traditional helmet (SSh-68), what looks like a motorcycle helmet (see model above), and the 'Sphera" type helmet used by the MVD (internal troops).

The Sphera helmet is an interesting addition, I have not seen modeled before.  They are basically three titanium plates held in position by the helmet cover that created a spherical shape around the user's head.    I opted for a similar mix of camo patterns for these as well.  I kept all of the field kit the same color to provide a more cohesive look for the group. 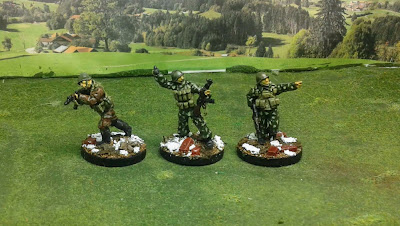 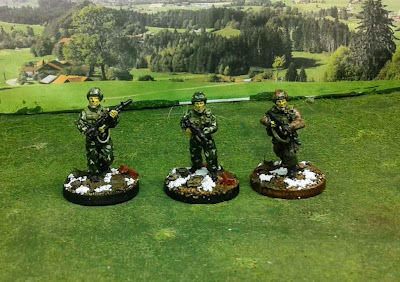 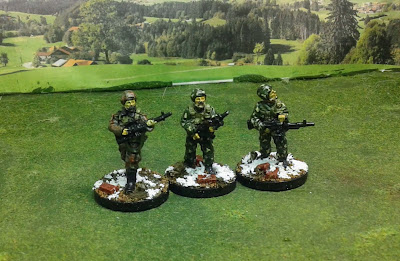 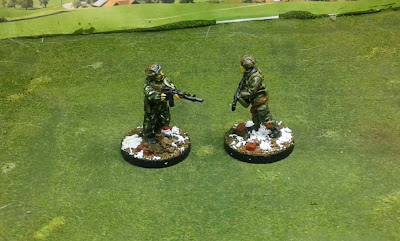 The only remaining model is a prone figure with an RPK LMG.  The set came with four prone figures (1 Russian, 3 Chechen), which I will probably finish last. Although realistic, I am not a huge fan of prone models as they are harder to use on the tabletop.  I usually save them for use as prone status or sniper markers.

I will probably pick up the Russian VDV squad at some point to round out the collection.  Until then, I still have another 20 Chechen's to finish.
28mm Chechnya Cold War Russia