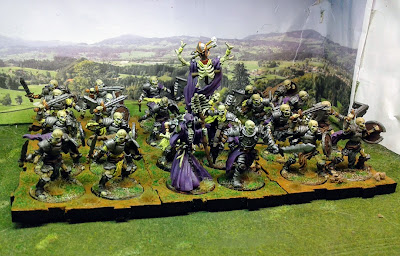 Mason and I received a copy of the Runewars Miniatures Game for Christmas this year.  I was not  tracking on the existence of this game, but found it to be a pleasant surprise.  The game is produced by Fantasy Flight Games and uses their patented "Box full cardboard" approach to rules design.  There are move templates, effect tokens, specialty dice, unit cards and even specialty bases.  The interesting mechanic are the order dials you use to set up each turn.  (If you have played X-Wing, it is similar but with a primary and secondary dial.)  Your orders establish your initiative order per unit, so both players stay relatively active.  We rapidly discovered that the base game does not provide enough miniatures for a full game, so we took advantage of the post-Christmas sales to pick up a second boxed set and some command sets.

Mason has been enjoying the game and declared his desire to actually paint the human side.  That leaves the forces of decrepit darkness to me.  Units are formed around stands of 4 figures each that are mounted on interlocking blocks.  Thus I opted to paint the figures in groups of 8 at a time.

My overall approach was to undercoat the whole group Black with the exception of a few of the specialty miniatures.  I went over the armor with a dark gun metal color and the clothing is a mixture of pale yellow, purple, Copper Green and Leather brown.

First up is a block of 'revenent' warriors led by a command group.  The necromancer was based in AP purple as was the standard bearer.  I have another 12 to go, which will provide enough to field 2 infantry blocks. 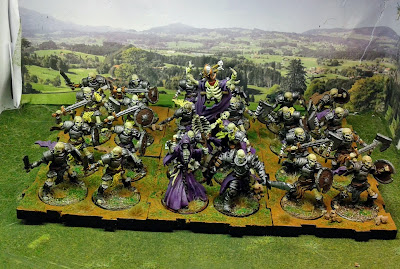 Next up, the first block of archers. These were painted the same as the infantry.  You may notice the armless guy in the back.  Unfortuneately, he arrived without arms.  FFG does have a customer service page that did forward me the necessary piece, so he will be properly armed in the near future. 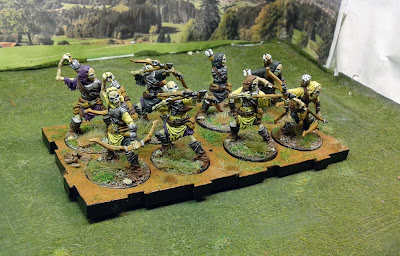 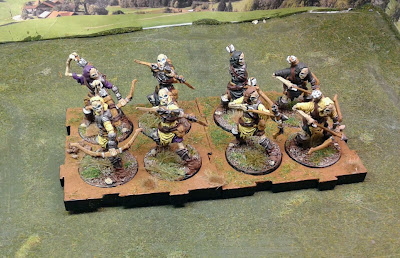 The 'general' figure comes on a large terrain base, but is also individually based to include him in the infantry unit if you desire.  The undead forces design aesthetic includes lots of antlers for some reason leading to Lord Bullwinkle the destroyer here.

The cavalry contingent is made up of a model called the "Carrion Lancer"  Basically a giant terror-worm with a skeleton riding it.  I did one with grey skin and the other with Purple to see how it looks. 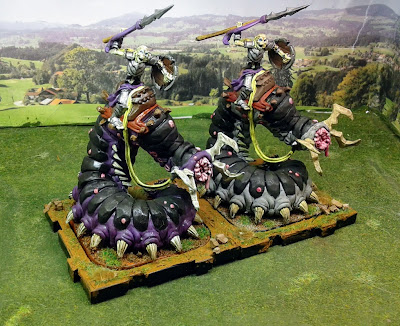 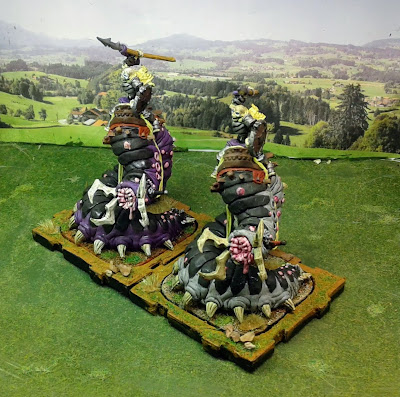 There are several additional units available for this army, but the price point seems a little high at this point.  ($35 for two of the Carrion Lancers, or $25 for 8 infantry)  I may expand the collection if my stalwart opponent finds it within himself to apply paint to model, or at least play a few more games.
28mm Fantasy Runewars