Beyreuth Dragoons and the Last of the Prussian Cavalry 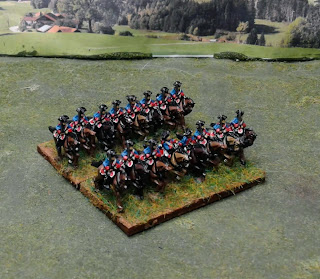 First up are the Bayreuth Dragoons  I assembled this formation using the last of my Old Glory Prussian and Austrian Dragoons.  There are some slight variations with regards to the saddle furniture, but otherwise close enough to pass inspection for 10mm figures. 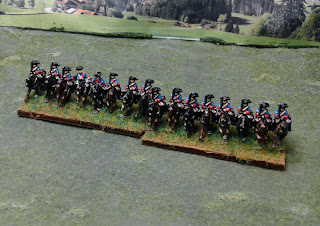 I had enough Austrian and Prussian Curassiers left over to do two more regiments so long as I didn't worry too much about command figures or horse poses.  The "head-down" sculpt for the horse miniatures is my least favorite in the collection as the detail work on the head and mane is very sparse leading to a more lizard-like appearance.  Originally, I planned to just use that sculpt for the Regimental Colonels in the Infantry Units, but there were just too many of them.

Thus I opted to paint these two 'reserve' Prussian Curassier Regiments to fill out the current bill. 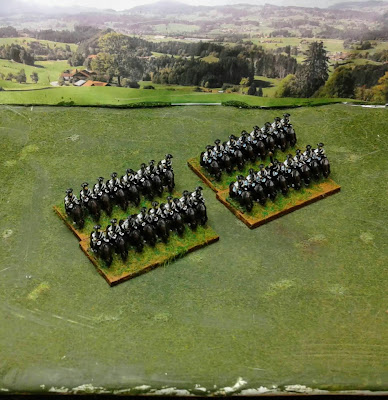 All of the horses were done in the same color, and the only variations were kept to the use of Black and White colors for the N.4 Gessler Curassiers and Lt Blue for the N.5 Brandenberg Curassier.


I have along term plan to add the Dreisen Curassiers with their distinctive yellow facings, but this has exhausted my current supply 10mm SYW cavalry figures.  I still need one more Curassier Regiment for the Prussian side of Chotusitz, but fortunately the surplus Modena Curassier from the Austrian side should fit the bill.

As you can see, I have enough units painted now to try Chotusitz, so my next step is to build the scenario.  I am hoping to get them into action in the near future once I can get work back under control.

This leaves only a few command stands and three regiments of light infantry for this collection.  For those looking for me to change the channel, if you are interested in 28mm Samurai and Koreans stay tuned.
10mm Honours of war Old Glory Miniatures Prussia SYW