and the last of the Musketeers 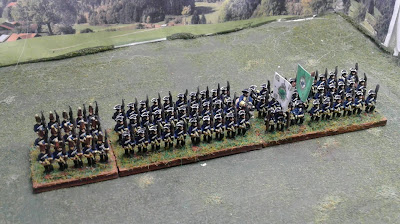 IR10 Knobloch becomes the last Prussian Musketeer unit for the foreseeable future of this 10mm SYW project.  This gives me 18 line regiments and five regiments of fusiliers, all but 2 of which have their matching Grenadier stand painted as well.  While I still have two regiments of light troops to add, I have more than enough to field the scenarios I am interested in gaming for the near future. 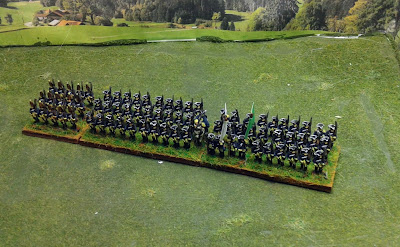 The only critical regiments left are the last of the Prussian Curassiers.  With that, however, I have found the crux of my next problem: 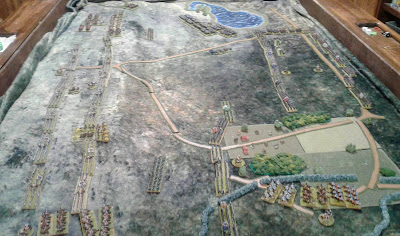 This is the start of my layout for the Battle of Chotusitz 1742.  I became interested in this fight following Jon hosting several matches of the prior Battle of Mollwitz last year.  The promise of a grand scale battle with the Prussian Cavalry and Austrian Infantry itching for redemption provided inspiration to finish the project in short order rather than let it slowly build like my other projects.

So what's the problem?  My board may be too small.  My regiments are based on a 12cm frontage and can barely fit across the width of my 6' table.  The 4' depth does not provide for much in the way of maneuver space.  I may need to either use a tabletop board to get more space (thus losing the ability to put it away between iterations) or go half-scale like I did with my solo version of Zorndorf (which would leave half the collection on the shelf.)  I am a bit envious of Jon's 6'x12' monster table, but as yet have no where to replicate such a behemoth myself.  Oh well, there are worse problems to have.

There are still the aforementioned Curassier to go, so I have some time to work the problem in the short term.  Overall, though the collection has come together quite nicely.