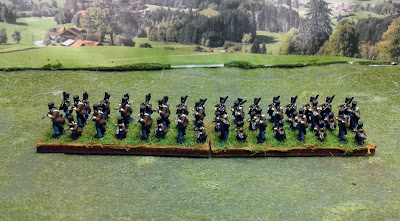 Two Austrian updates in row?  I am on a roll!

My second Grenzer unit marshals for battle in the form of the Slavonisch-Brooder Grenzer.  These have the same two stand organization as the line regiments, but with 48 figures versus 62. I considered basing these figures on four 30x30 bases to facilitate open order coverage, but I think this will work.

I did these with a black undercoat, so the overall painting process was fairly quick:  Oak Brown Jacket, Mid-Blue pants/vest yellow details.  With a dab of flesh and white crossbelts they were done in an evening.  There are 50 figures in a pack for the Old Glory figures, so it is basically one unit per pack.  I have one more left, so the Warasdiner-Kreutz Grenz will be joining the force eventually. 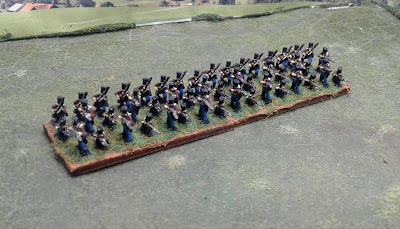