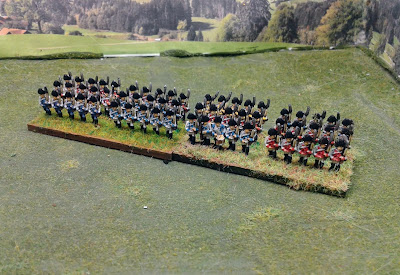 Is the November half over already?   I have managed to finish a slew of 10mm figures to add to the SYW project.  Now I just need to finish basing them and adding Standards.  Thus, my first update being a unit that was half-based (baked?)  and needs no flags.  These grenadiers are part of the last group that needed 'upgrading' to meet the new figure density requirements.  I added another six strips in figures and used colors for the new musketeer regiments I am working on.  They look o.k. for now, but I am already considering changing the basing regime for the Grenadiers (again...)

I want to add some flexibility, and noticed that Jon's combined grenadiers form a 80mm frontage rather than the 120mm frontage of the other units.  I also want to distinguish the combined grenadiers from standing grenadier formations.  Right now I am leaning towards switching to 30mm squares for the grenadiers so I can make combined units with 3 stands (90mm) frontage.  This also makes organizing the units easier as I just need to paint three Grenadier strips to match whatever unit I am currently working on.  I am trying it out with the Prussian Regiments currently on the painting desk, so I will see how it works out over the next couple of weeks.  Until then I have a lot of Hussars to post. 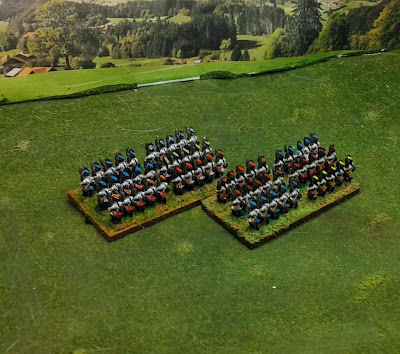