Even more Austrian Infantry and Artillery 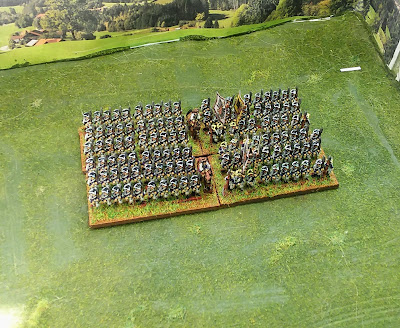 I knuckled under and decided to tackle to backlog of 10mm SYW figures I have accumulated this year.  I had enough Austrian Musketeers left over to either complete the upgrade of the remaining units or paint two new units.  Guess which option I went with?

As with the other regiments, the only real differentiation you can do at this scale is with cuffs and lapels.  As such I opted to go with IR#13 Moltke (Dark Violet)  and IR #14 Salm (Black) to give me something easier to distinguish than the typical Red and Blue. 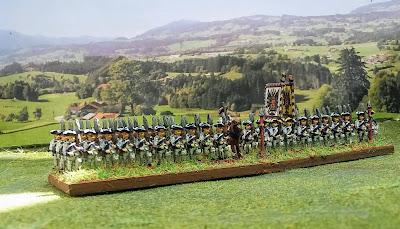 I am really liking the mass I am achieving with the triple ranks.  I am using the same size bases as with the 18mm Russian collection, so I wanted to ensure this scale provided something unique.  The even rows work well with the only hangup being the command stands.  I have to take two and cut them up to get the right look.  What I end up with is two flag bearers, 2 sergeants and a musketeer for the front rank, and three musketeers and two drummers for the rear rank.  The real challenge is getting them to rank up properly with the infantry strips on the base.  The Prussians are proving more of a challenge as I am finding it difficult to cut the flag bearers free from the sergeants, so I have settled on having a model between the flags.  Not ideal.
I also managed to finish another three batteries of Austrian guns.  The first two are more medium guns from Old Glory
The last one is the Pendraken howitzer model.  These model are a bit heavier sculpts and it was more of a challenge fitting them all onto one base.  I picked up two packs each of the Austrian and Prussian howitzers to get a feel for the sculpts and am overall fairly pleased.  Pendrakens minis tend to be larger, and a bit chunkier than Old Glory.  My only complaint are the size of the bases on the figures.  They tend to have a wider footprint on the base which makes ranking them up harder.  You also get six gun crew per cannon model, so I have plenty left over to match up with the Old Glory cannon packs.
One of the nice additions with the Pendraken line is that you can actually get limbers.  (The howitzer pack comes with 1 gun, 1 limber, 4 horses and 7 figures)  There are even different limbers for the Austrians and the Prussians.  I tried doing double stands like with the guns for these, but the resulting base was just too long.  The final models are based on the same 30x60mm base I use to represent an infantry battalion. 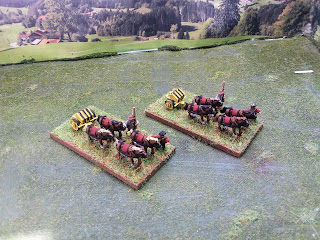 I would love to pick up some more limbers, but they are only packaged in the artillery packs on the website. I am assuming special order may be possible. 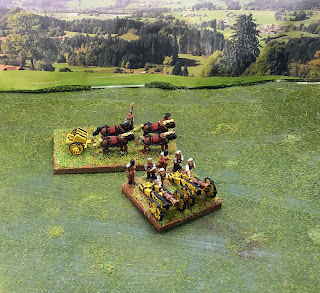 That is all my remaining Austrians, now for the Prussian hordes.
10mm Austrian Honours of war Old Glory Miniatures Pendraken SYW