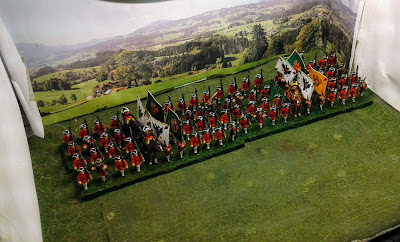 The last of the major muscle movements for this project are finally complete.  The remaining four infantry regiments for Saltykov's command cross from the painting table to the storage box.

All four regiments were done using Blue Moon's Russian Musketeers in Summer Uniform and command figs.  The mounted colonels are all from Eureka's SYW range.  The banners were all taken from Kronoskaf's entries on the individual regiments.


The eagle eyed will note that one regiment is missing a Colonel.  I ran out and am waiting the last re-supply to finish the project entirely.

All that now remains is 10 musketeers for the 5th Observation Corps Infantry Regiment and six command figures for the Observation Corps Grenadiers.  That said, we could readily execute the scenario from what is on hand, so it appears we are go for a re-fight next month.  I just have to get all these figures up to Jon without mishap.
18mm Blue Moon Russia SYW Zorndorf