I know; wrong army, wrong scale!  At least it is the right era (Seven Years War.) My current focus on Sengoku era Japan has not left my SYW projects completely neglected.  I continue to churn through my backlog of 10mm Austrians and 18mm Russians.  The Prince Savoyen Dragoons are merely the first fruit of those efforts. 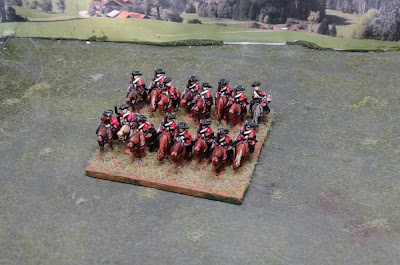 I opted to base this unit like the curassier with two stands of 8 figures in a single staggered line.  The old glory Dragoon packs come with a mixture of mounted grenadiers w/bearskins as well as the standard dragoons, so I am consolidating my two packs into two separate dragoon regiments, with  a plan to add a stand or two of 'consolidated grenadiers'  according to Kronoskaf:

On the eve of the Seven Years's War, the regiment counted 12 companies (6 squadrons) and a company of horse grenadiers. For battles, the latter was usually converged with other similar companies to form an elite unit.

I have not found any OOB's that use support this yet, but I figure it will make an interesting looking unit that will stand in for another Dragoon unit in a future scenario.

Much as with the 18mm Russia project, I am color coding my cavalry by using predominantly dark brown horses for the heavies, mid tones for the Dragoons and Chevauxlegers, and tans for light cavalry.  I mixed up the secondary colors to give a sense of variation.

The challenge at this scale is hitting the right mix of detail to allow for easy unit recognition and a pleasing appearance from normally play distances.  This I focused on this unit first since they have a very distinct red and black scheme.  I used a white crossbelt vs. 'natural leather' to help the detail stand out.  I even skipped the gloves just to add a little more black for accent.  Next up I plan to do
the Kolowrat-Krakowski Dragoons for similar reasons.

I am still on track to have the project completed in time for the 260th Anniversary game against Jon's Prussians.  Batch painting the figures is definitely making the task easier but it does result in some rather bulimic production.  I finished painting 60 musketeers and am nearly complete with the accompanying command figures to give me the remaining four regiments for Galytsin's Division.  Similarly I have finished the first batch of troopers for my three Dragoon Regiments.  The rest of the required figures are either on-hand or en route.  My plan going forward is thus:

This gives me some wiggle room, but is still quite manageable barring significant life interventions.  I give my chances about 80%...
10mm Austrian Honours of war Old Glory Miniatures SYW