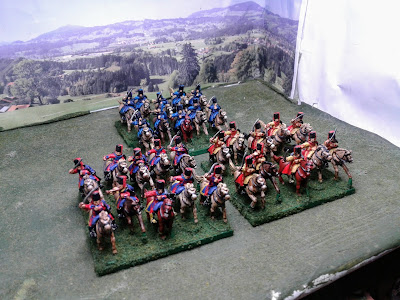 Progress!  Three regiments of Russian Hussars join the effort to defend Zorndorf.  These account for 3 of the 5 regiments I intend to do.   (The Horvat Hussars are still to go.)  I did all of these using two bags of Blue Moon Hussars and one command pack.  The command pack is the only cavalry pack they do with 6 figures (Trumpeter and Commander) rather than 9 figures.  It is still the same cost as the Dragoon and Curassier command packs, so the value difference versus Eureka is not as great.

I opted to stick with my original plan of color coding my regiments using the mounts.  All of the light cavalry will be on light toned bays, red tinged mid-brown for the mediums and darker browns for the heavy cavalry.  I think it makes a nice counter-point to the more colorful uniforms for the hussars as they are the only group with different regimental uniforms.  That said, the Horvat Hussars wore the same uniform as the Moldavians, so I plan to do them with Eureka Hussar models instead.

I also opted to go with 5 models/stand versus 6 to make it easier to ID the light infantry versus the mediums/heavies on the table.  This means that I have another six castings left over, but they will probably find their way onto a command stand or marker of some sort in the future.