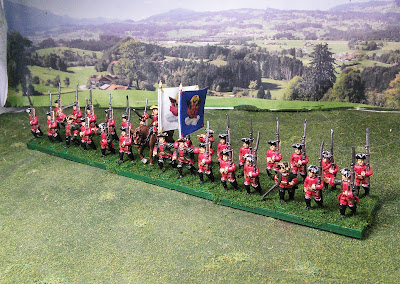 Progress towards Zorndorf!  The 1st elements of the Russian Observation Corps are now complete.  This formation is proving to be a little more  difficult under the existing organization structure as its three battalions accounted for over 2000 soldiers! (compared to the 1200-1500 in the regular line units)  My solution is to represent each regiment with three bases which allows me to brigade the 4 over sized regiments into six normal sized regiments for Honours of War.


This is my first complete regiment using Eureka miniatures as Blue Moon doesn't do the Observation Corps yet.  The only missing figures are the Grenadiers.  The observation corps is somewhat distinguishable with their Cavalry Boots and Sabres, so simply doing normal Grenadiers with black leggings at this scale would not be ideal. 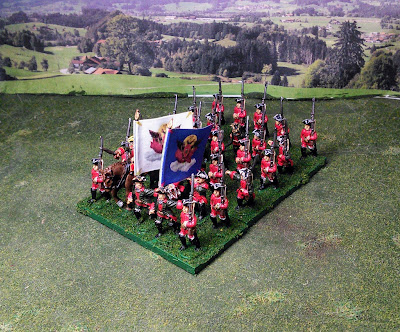 I did this unit with all marching units, and have a selection of the firing models for the 3rd regiment.  (Coming soon)  I think the 10 figures/stand is a little sparse, so I may up the number to 12 figures for the later regiments.  I will try it out with the 1st Grenadiers and see how it looks.
18mm Eureka Miniatures Honours of war Russia SYW Zorndorf