SYW in 10mm: The White Walkers come forth

December 19, 2017
Continuing the SYW theme of my hobby of late, here are three regiments of Austrian Musketeers to bring the hated Prussian to heel.

These were done with more of the Old Glory 10mm collection, which does the infantry in five man strips, similar to the Baccus 6mm line.  Overall it allows for a greater figure density than the Pendraken figures, and I like the look.  I find the command strips a little annoying as they only have the one flagpole, and it is difficult to separate the stand to make it look a little more even with this basing system.  The standards are just downsized copies of the one's Jon uses.  I find that 10mm standards work better than the 6mm ones as the size is just large enough to differentiate some images.  I am coming to find that I prefer the cast banners that come with figures like Pendraken over paper standards for these smaller scales, however.


I am taking advantage of the relative uniformity of Austrian uniforms to make these usable as either regimental or battalion bases to fit the scenario.  Basically, I plan to do two regiments of each paint scheme and give one a white Leibfahne and the other a yellow Regimentsfahne.  For example IR1 and IR3 here are virtually the same less the color of the turnbacks.

The next change will be to do a division's worth of infantry in black gaiters.  That should allow for simply unit ID on the table top, without looking out of place.

So with a division of infantry complete using both Pendraken and Old Glory minis how are things stacking up: 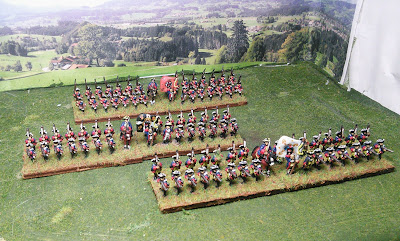 Old Glory Miniatures
Strip basing allows for quicker painting and more uniform look overall to the units, but lacks diversity.  Strips also give units a two-dimensional look.  Strips lend themselves to dense units with three ranks on the same base where I would otherwise only manage 2.  Command strips include all necessary pieces but only allow for 1 standard per unit and place the drummer in the front rank.  Banner poles allow for the easy addition of paper standards.  Cost per figure:  $0.10 (w/ Old Glory Army discount) + shipping ($9.00 flat fee) (Basically $4-5 a 40 man regiment)