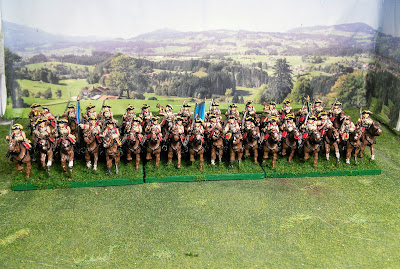 My first attempt at Russian Cavalry gets added to the collection.  There are Blue Moon Russian Curassiers.  Basically, I bought two packs of cavalry and one pack of command.  This gave me enough figures for three 12 figure regiments, with three castings left over to spare.

The Russian army of the period lends itself very well to mass production as there is very little variation in uniforms.  Just as with the infantry the only thing that differs between regiments are the colors.

For these I went with the same base color for all of the horses, and added variations with manes, blazes and stockings.  I plan on doing something similar for all of the regiments for quick identification.
There were four regiments (16 squadrons) present on the Russian side for Zorndorf.  Depending on how we scale it, this either completes my needs, or I will need one more unit (Kazanskiy Curassiers) to finish the requirement.  I will probably use Eureka figures for that unit as I can purchase the figures individually. 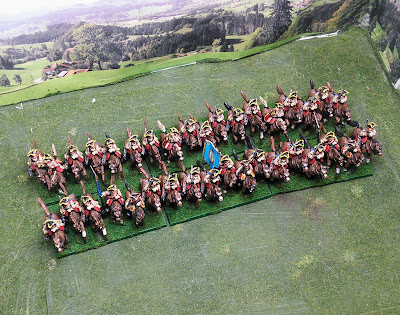 *addendum.  As I do more reading/research I am finding several peculiarities with the Curassiers.  For 1758 on the Prince Federovich  and 3rd Curassiers actually had breastplates.  The Novotroitsky and Kazanskiy regiments were still wearing their Dragoon uniforms and riding inferior mounts.  There were a total of 6 squadrons between the two of them and an additional 6 squadron of Dragoons present for the battle, so I will probably just replace both regiments with two double stands of Dragoons to reflect the small size of all four regiments.