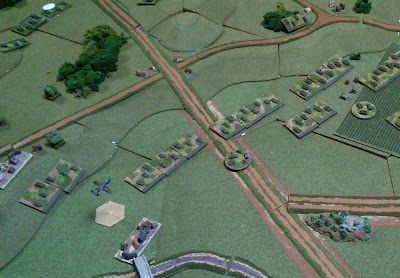 I put together my first play-test for BCT a few weeks back and am still sorting through my notes.  For the first attempt I chose to use COA #1 "Fist Full of Dice."  I chose to keep the scenario relatively simple with a single US Army Cavalry Squadron (essentially an oversized Armor Battalion)  defending a ridgeline from a reinforced Soviet Motor Rifle Regiment. I left the dismounts out of it as I wanted to focus on the basic firing mechanics, reconnaissance/spotting rules, and field artillery.  The overall order of battle then is


A quick refresher on the basic concept.  I used the dice for Halo Ground Battles, ignoring the "skull" result except for special occasions.  This give the following results

Modifiers affect the number of dice rolled for each side.  For example the Battalion mortars could support one platoon and give either +1 attack (for attacking infantry) or +1 defense (smoke to obscure fire) to up to three stands.  Field artillery could then be used similarly or applied on its own providing attacks against a specified beaten zone.

My hasty QRF sheet for this game

*all units get at least 1 attack roll
** Ignore for stabilized guns
*** Mortar support is for AP shots only. Mortars add 1 die to 1 platoon's total. An Artillery battery adds 1 die to each platoon in a company.
****all US platoons would rate as large with 4 or 5 vehicles each.  Advantage is lost when degraded.


With that, I deployed the defenders on the table.  As this was a solo game, I figured I could keep myself honest.  One of the mechanics I am working on, however, is the reconnaissance phase:

In the Recon phase, the only units deployed on the table are the opposing recon platoons/sections and the Battalion Headquarters markers.  In this case, the BN HQ reflects the frontline "trace" of the BN.  Each turn the players alternate moving their recon units and doing some spotting.  Spotting roles are made against any recon units or HQ stands within range.  I arbitrarily set the initial spotting range at 50cm (5km) to reflect all the other assets (electronic sensing, air recon, ground surveillance radar)  After movement each element gets to roll 1 die.  On a modified roll of a '6' that unit counts as spotted.

Once a unit is spotted the spotting unit may make direct (if in visual/weapons range) or indirect fires against it. When a battalion HQ is spotted, the controlling player must deploy the entire battalion onto the table with the lead stands on-line and centered on the HQ marker.  The HQ marker is then moved to an appropriate position behind the fighting platoons.
I opened up with an initiative roll (simple d6) and had each side alternate movement by battalion.  Following the scouting rolls, I got started with artillery.

Artillery is composed of two pieces:  Call for fire and Attacks.  The call for fire is a simple roll to activate a battery.  (You don't need to roll for Battalion Mortars)  Roll D6 and apply modifiers

For Jamming and Counter-battery I opted to make it easy and have it be an attack die roll.  If a 1 or 2 comes up deduct that value from the roll.  The HQ stand can make an air defense with its dice to prevent an air mission from coming in.   Each battery dedicated to counter battery fire gives 1 die, but can only affect 1 target battery.  (2 for heavy (203mm+) guns)

The call is successful on a 5+

To make things simple the attack roll results in 1 die roll against each stand in the target company.  Guns can be used in three ways.

The idea is to abstract artillery effects.  You can use it to protect your force, support an attack or disrupt enemy movement.

Overall, I am pleased with how the recon and artillery portions worked out.  My scouts were able to suppress targets without exposing themselves and disrupt the Soviet advance.  As the game developed the Soviet side was able to use effective fires to aid the assault on the objectives.  Counter-battery worked rather well and prevented artillery from dominating the game or requiring me to track ammunition expenditure.


Once both sides located each other the game got underway in earnest.  The hidden Troop in the south was able to volley fire and destroy a Soviet company using ambush fire.  After that it became an exchange of fire as the Soviet side attempted to mass fires against the objective in the center.


Another mechanics I introduced was cohesion.  Rather than have units remove damage tokens at the end of the turn, each battalion rolls attack dice equal to its cohesion value and removes up to the resulting total hits from the battalion.  The Regiment's cohesion dice apply to any units in the command.  This forces the player to focus on supporting the critical point and husband resources.

For Chemical Weapons I went with a simplified system.  Roll 1 attack die per stand, on a skull result the platoon is destroyed. Otherwise it automatically takes 1 hit.  Long term I may need to add a marker system for contaminated areas and defense roll for protected vehicles.
Following the Soviet chemical attack, the US commander called for friendly air support.  I brought in the A-10s and designated 1 companies to attack.  Each flight rolls 1 die per company stand (Gun) or 3 dice against 1 stand (bombs)  The defending unit rolls its air defense dice.  Any results of a 1 fend off the attack. (Roll again next turn) a 2 result eliminates the asset.  BN Headquarters fire defensive dice.  Brigade Headquarters only impact the call for fire roll.

Overall, the system is giving me what I want.  Although the narrative might seem complex, the actual play worked intuitively.  I did run into some speed issues that I plan to address in the future:

Company Fire - Speed up the game by having companies fire on companies rather than stand versus stand.  I started doing this after about 30 minutes and it significantly sped things up.\

Markers for Mortars/Artillery - I kept forgetting battalion mortars.  I am thinking of giving each hq a single smoke/HE marker per mortar die to allow it to designate the target at the end of movement.  Perhaps the same can be done for artillery.

I want to try out the infantry rules next, and then repeat the entire process using a single D10 per stand rather than a pile of dice.
3mm BCT Cold War Wargame Theory