Operational Design in Wargaming Part 6B, how do we fight the cold war gone hot?

July 12, 2017
Now that I have established my evaluation criteria for a new rule set, it is time to develop the core of the rules:  combat resolution.


Values assigned to Units
There are three general types of units in BCT: Command, Combat and Reconnaissance.  Each unit has specific statistics to reflect how it behaves on the table. I want to limit both the number of individual stats and the potential modifiers. The goal is to model the overall flow of the action without getting bogged down on charts and rolls. I threw in some example stats, but these are really place holders until I determine the final dice mechanism. 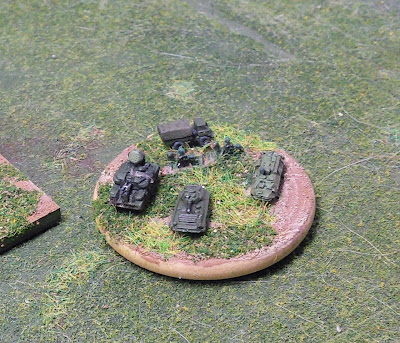 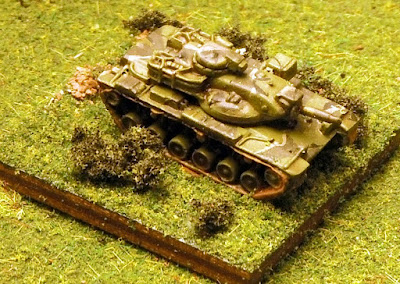 Reconnaissance Platoons
These share the same statistics as the combat platoons, although they will normally have a higher defense value and lower attack values to reflect their mission.  They have the additional trait of Observation to reflect their overall ability of the unit to locate enemy units.  In time I may add another trait to reflect detection ranges to reflect electronic sensing capabilities in addition to direct observation
Example 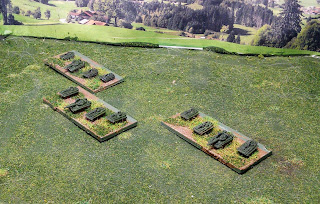 I may still opt to add or remove some stats after playtesting, but these meet the overall feel for the conflict I am trying to model.  Ideally, they should be relatively simple to understand, so I can print them out and add them to the unit bases for quick reference.

This leads to the critical point of the entire enterprise:  How will I actual resolve the conflict with dice?  I have been playing with several options and settled on two courses of action (COA). One uses a fist full of D6 and the other a single D10 roll.

This was inspired by the dice for Halo Ground Wars.  Each die has four possible results

Modifiers affect the number of dice rolled for each side.  For example the Battalion mortars could support one company and give either +1 attack (for attacking infantry) or +1 defense (smoke to obscure fire) to up to three stands.  Field artillery could then be used similarly or applied on its own providing a attacks against a specified beaten zone.


*all units get at least 1 attack roll
** Ignore for stabilized guns
***all US platoons would rate as large with 4 or 5 vehicles each.  Advantage is lost when degraded.

The Soviet player takes his opportunity: he has three stands to fire and chooses to use both full strength platoons against the M1 on the left.  The US player has one die of Mortar support and declares it is supporting that platoon with smoke.  That gives the Soviet  player 6 dice to attack versus the US players 5 (3 +1 for defense, +1 for Smoke)  The Soviet player gets a total of five hits, and the US player manages to negate 4.  The platoon is now disrupted.  The degraded Soviet tank fires but does not harm the other other vehicle.

I know, exciting. Also a good reflection on why you would not want to take 9 tanks head to head with 8 tanks in a good  defensive position.

This die system would also apply to the end command phase.  The cohesion value for the BN headquarters would reflect the number of hit dice to roll for his battalion at the end of the turn.  The total number of hits rolled would equal the total damage he could remove from his disrupted/degraded platoons.

This is a more traditional method with each platoon rolling a single D10 for the target.  Essentially you take the Attack Value - Defense Value , apply modifiers and then roll a D10.

Enough pontificating for one evening.  I need to actually get the West Germans done, so I can try these out!