Chariots of (not necessarily) Fire 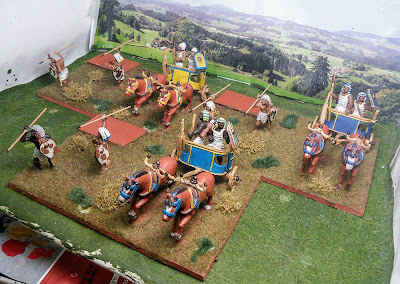 I have unwittingly entered into an arms race apparently. With Assyrian forces menacing my borders in ever greater numbers, it seems necessary, now more than ever, to address the growing "chariot gap."  To that end, I committed my self to deploying these strictly defensive  heavy chariots to act as a deterrent to Assyrian aggression.  With the blessings of almighty Ra, we hope we need never use them, but we stand ever vigilant, ready to deploy them in defense of our beloved Nile.... 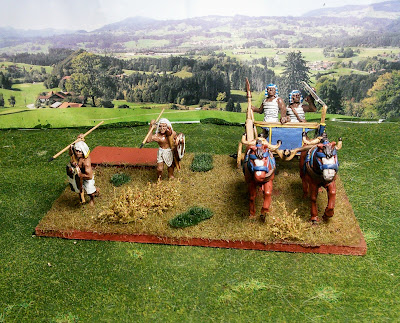 Black Tree Design included chariots in one of their many deep discount sales a few months back, so I opted to splurge on some of their chariot models. I opted to do the first three heavy chariots in the mix of blue and yellow I am using for all of my units in this army.  In keeping with the later Kushite theme, I opted to go with the darker skin tones of the southern peoples who dominated during the time period. 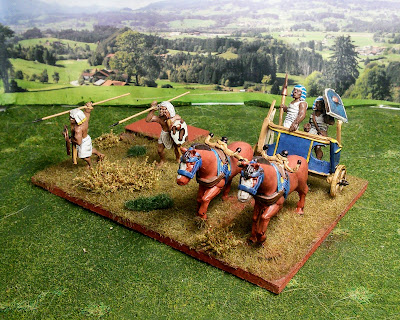 The chariots are relatively small compared to the traditional 12cmx80cm bases used for Impetus, so I opted to add some 'chariot runners' to fill up the base without the added mass of an additional chariots.  It has the added benefit of keeping the cost down on what is intended to be a limited army collection.  (We'll see how long that lasts...) 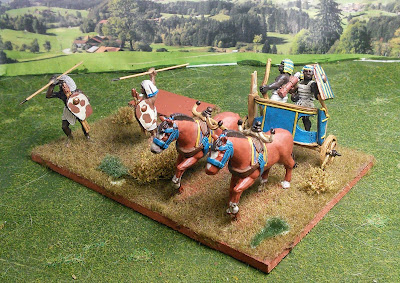 I kept most of the colors the same, although for the metal fittings I decided to try out Army Painters "unfinished iron" from their metal range.  It has a nice bronze tint to it which works well for the time period.  I am still on the crossroads on how much iron I want to include on the models. 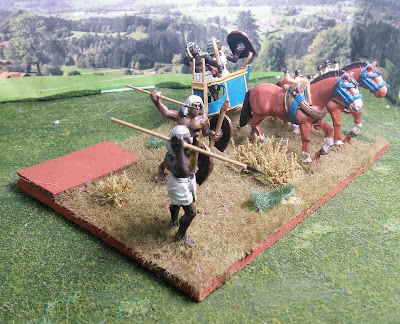 There are three different heavy chariots variants from BTD, although the only difference is in the riders.  It pretty much comes down to having an archer or spearman as the primary fighter.  The Skirmishers do not come with javelins, although BTD does offer them separately.  I opted to use the North Star 50mm wire spears since they look better proportioned.  Unfortunately the models come with pair of javelins clutched in their left hands which are noticeably larger. 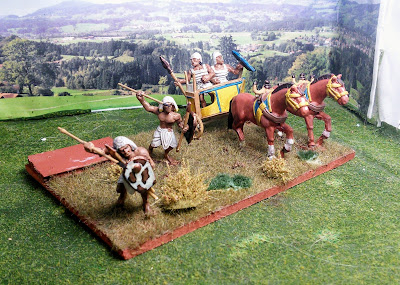 Assembly of the chariots does require a healthy dose of epoxy resin and pinning.  There is no socket for the riders feet for example, so the connection is flat metal to flat metal.  The yokes for the horses include a pin, but there is no corresponding hole on the horses.  They do drill rather easily, so it was not a major ordeal. 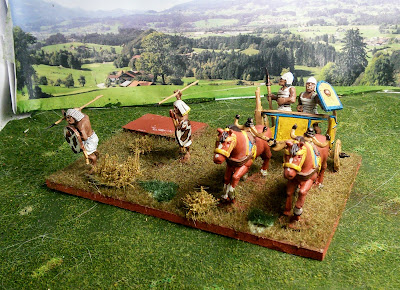 I am still experimenting with the basing for these, and looking at the pictures, I need to actually glue down the larger tufts.  They are supposed to be self-adhesive, but I think the static grass is interfering with the plan.

I was considering doing the light chariots as two to a base, but with most still on back order I will probably do them in a similar fashion.  I recently received the Pharaoh's chariot, but I am thinking about using Warlord's fancier model instead.  Time will tell.
28mm Ancients Black Tree Designs Egyptian Impetus