March 25, 2017
Now that Jon has posted the summary of the battle, how did the plan work out?  Better than expected in many ways, but still not decisive.

The overall plan was simple: drive deep through the middle for the Copa river and force the Austrians out of their prepared positions to face the French in the open.. 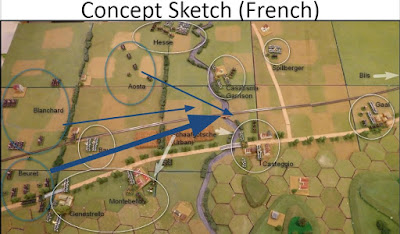 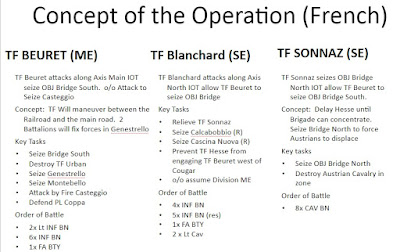 So what happened?   Here is the battle from the French commander's perspective: 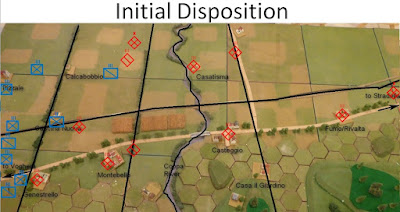 Laying out the battle into its basics I am looking at it primarily from the regimental (2-3 stands of Infantry each) level.  French forces are arrayed in the SW corner with a few units already in contact outside Genestrello. 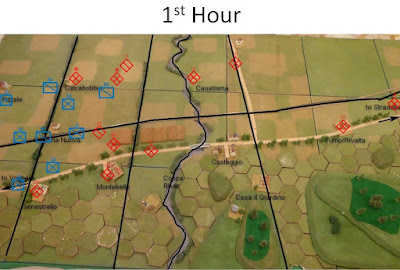 The first two turns progressed as expected.  Hesse seized Calcabobbio, Baum fell back on the Wheat Fields, and the Balance of Scaffgotsche's brigade moved up from Casteggio.  Hesse's cavalry withdrew behind the infantry, which allowed my Cavalry to make their planned breakout to the East earlier than planned.  Both French brigades advanced across the center and started doing damage. 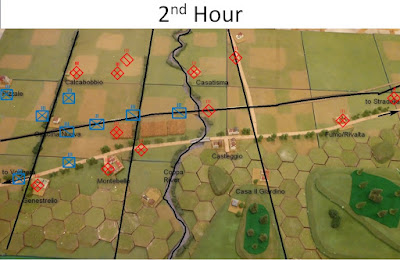 In turns 3-4 the French cavalry was able to concentrate and blast out to the east.  The Austrian forces massing in Montebello turned to face the threat and thus could not mass against the infantry brigades advancing along the center.  Genestrello was overrun by French reinforcements and the Austrians had effectively lost a regimental force in the center. 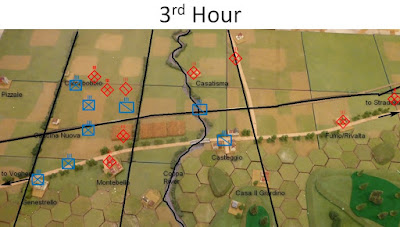 Turns 5-6 turned out to be decisive.  I had not expected the cavalry to make advance so quickly, and discovered Casteggio to be weakly defended.  The ensuing melee resulted in the destruction of a second Austrian regiment and the elimination of the majority of the Austrian cavalry.  The Austrian commander was forced to activate his reserve, which effectively ended any threat to the objectives west of Montebello. 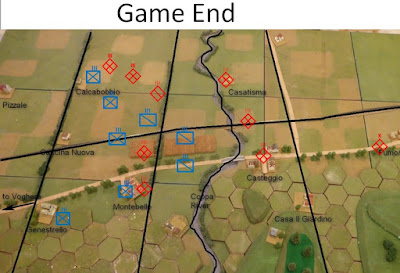 In the end phase, the Austrian reserves were able to force the depleted cavalry back across the Coppa, where they switched to a  'rest and rearm' posture in a blocking position behind Scaffgotsche's remaining forces.  The remains of that brigade was effectively cut off and facing annihilation.  Hesse was maintaining pressure to the North, but significantly depleted.  The French were in an excellent position to destroy the remaining forward deployed regiments, but did not have the time to organize a supported attack to force the river against determined fresh troops.


While I felt I achieved a solid Minor Victory this time that closely matched the historical outcome, I was still no closer to seizing and holding Casteggio at game's end.  (The major victory objective).

Jon and I will make another go of this scenario in the near future, and now I must take a turn with the Austrians.  I honestly think the challenge there is much greater.  The temptation for the Austrian player is to focus on not losing.  (Holding the three positions in their control, and contesting the other two)  rather than trying to force the road west of Genestrello (The major victory condition. ).  My choice appears to be either going for the big win, or the small one.  They seem exclusive.  Decisions, decisions.
Battle report ODW rants Wargame Theory