Rehabilitating the Past 2.0 -Better Knights of the Realm! 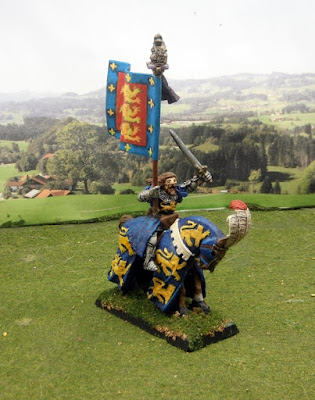 Some more 21st century upgrades to add to the mix.  First up, this customized Battle Standard Bearer.  This happy fellow is a heavily modified Grail Knight local Sculptor Jason Wiebe  did for me back in the mid-90s.  Jason's does a lot of excellent minis for Reaper, and I snap up some of his sculpts from time to time when I see them in local stores.  (Someday I am going to finish that Owlbear...)  The attention to detail on this mini is great.  I like the little things like the Mail Coif pulled back from his head.  The horse in the one that GW did for their not-Joan-of-arc Repanse of Leonesse. 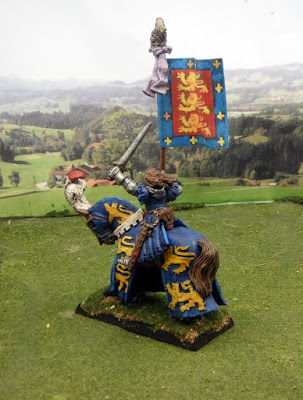 The next six figs are a mix of Metal and Plastic Knights of the Realm from the 4th edition re-release of the Bretonnian Army  (When they changed from medieval Bretons/French to High Middle Age Arthurian types)   I originally had two units of six minis each with a focus on Blues/Whites for one unit and Red/White for the other.  These guys are tricked out lance pennants and old school GW decals.  I have updated a few, but am finding it hard to separate many decals from their backing 20+ years later.