A return to Teugn Hausen (Thann)

December 02, 2014
Ian over at The Blog With No Name, was more than kind to send me a draft of the 6mm Napoleonics rules he has been working on.  (The Smell of Powder)  I was excited to see them as my 1809 project is nearing completion and I still have not found the right set of rules for it.  A quick read through had me intrigued so I decided to give them a try with a solo game of the action at Teugn Hausen on my small battle board.

Ian's rules use 60mm square bases, but I decided to keep my figures on the 60x30 bases due to the small size of the board.  The rules themselves use a mix of written orders and an Impetus like activation system.  Each turn, the sides take turns rolling to move battlegroups.  The difference from Impetus is that once one side has moved all of its command, the other side only moves onemore command (or none for the austrians) and the turn is over.  This means that the one side may move everything while the other side moves one for the turn.

Firing is done with a D6 and a chart resulting in losses to cohesion and/or morale.  I really don't want to get into a rules review as the rules are still under construction and they are Ian's to discuss not mine.

On to the battle.  Each side had three divisions, with 1 stand representing 1 regiment/brigade.


For the French would begin with Davout's 4th Division approaching through the Town of Teugn from the North in the first turn, with Gudin arriving on the road from the South on Turn 2 and Friant from the north on turn 3.  One scenario I found allows Gudin to arrive on the Austrian side of the ridge, but I decided to keep it all on one board edge for the first run through.

The Advance deployed in a blocking position overlooking Teugen.  With Lusignan and the Korps commander to the south in the valley across from Heugen.  Saint Julian approaching up the road from Thann and Charles w/ the reserve are parked in the South East. 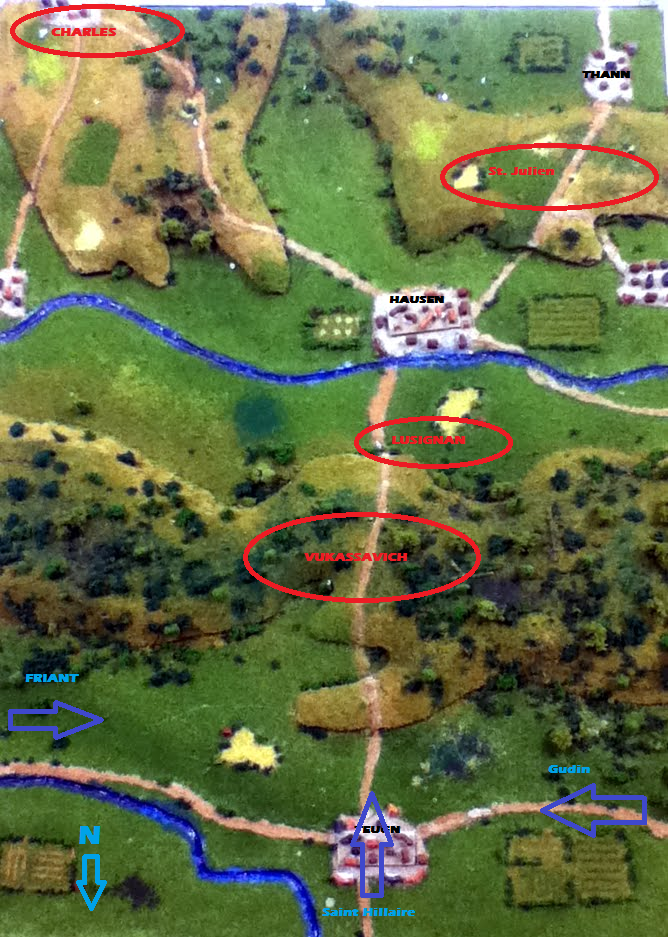 For orders, Vukaasavich would hold his blocking position while Lusignan move to this Left to support.  Both were to buy time for St. Julien to move North and Deploy on the heights overlooking Hausen.  Charles would be kept in Reserve until The Austrian player succeeded in an activation roll following Friant deploying onto the board.

For the French, Davout would be with 4th Division (Main Effort) for an assault towards Haugen along the road.  Gudin (Supporting Effort) would advance along the western edge in support, while Friant would have a follow and assume mission behind 4th Division.

At this point I rolled a '6' for the thunderstorms that occurred later in the day bringing the battle to a close.  next up, some notes and thoughts.
1809 6mm Napoleonics Teugn-Hausen