As a followup to my previous post, I thought I would set up a solo game to test some ideas.  Most of the problems I cited can be addressed by the use of an Umpire or Game Master.  (Engage & Destroy used the moniker Game Operations Director or "Mr. G.O.D")   I think I will use the term 'Director' as a placeholder for now.

Part of the US Army's Military Decision Making Process (MDMP) is the use of Wargaming.  (Not as cool as the kind we do....)  This is often conducted with the Intelligence Officer (S-2) playing the part of the opposing force (OPFOR) using a scripted decision matrix.  This helps to control the flow of the evaluation process as it keeps the OPFOR on doctrine and allows for stimulus-response type analysis for evaluating a course of action.  It also helps the S-2 get revenge on the staff for being forced to deliver weather reports and long-winded road-to-war briefs that everyone just ignores anyway.  Everyone still awake?

For my game design, I am thinking of having the Directory run one side using written orders and a scripted scenario.  His role is similar to that of the GM in a role-playing game: establishing the setting and driving the story.  This creates more of a collaborative game as players on the same side fighting the scenario.  The danger is of course having a director who is intent on winning the game rather than running the scenario.  This also allows for a wider range of scenarios as the objectives may not necessarily be the same for all players, hidden movement can be utilized and complex situations can be managed more readily.

I started working on a modern rule set a few years ago.  I am using Modern Spearhead as my baseline, as well as some of the D10 adaptions for it like BattleGroupCommander: Red Storm.  I prefer the D10 systems as they allow for better granularity without resorting the 2D6 bell curve issue.  (With D10 '+1' generally means the same probability increment, not so in 2D6)  The figure scale is 1 stand = 1 platoon (or 4-5 vehicles)  and 1" = 125m.  The tentative name for this endeavor: Brigade Combat Team. (I know, original)  My goal is for each player to control a NATO Brigade or Reinforced Soviet Regiment.

For simplification,  I am opting to abstract some concepts:


I wanted to test out a large scenario for looking at multiple aspects like air power, massed artillery and CBRN/NBC threats.  To keep from overwhelming the game room I opted to use my 3mm West Germans and Soviets, and my Teugen-Hausen battle-board.

NATO would be represented by a reinforced PanzerGrenadier Brigade equipped with Leopard 2A1 and Marders.  My selection was somewhat limited by the available figures:

Facing them would be elements of a Soviet 'A' Tank Division from the Group of Soviet Forces Germany.  The lists provide for 10 stand and 6 stand Battalions, I chose to go with six stand Tank Battalions and 10/12 stand Mechanized/Motorized battalions due to material constraints 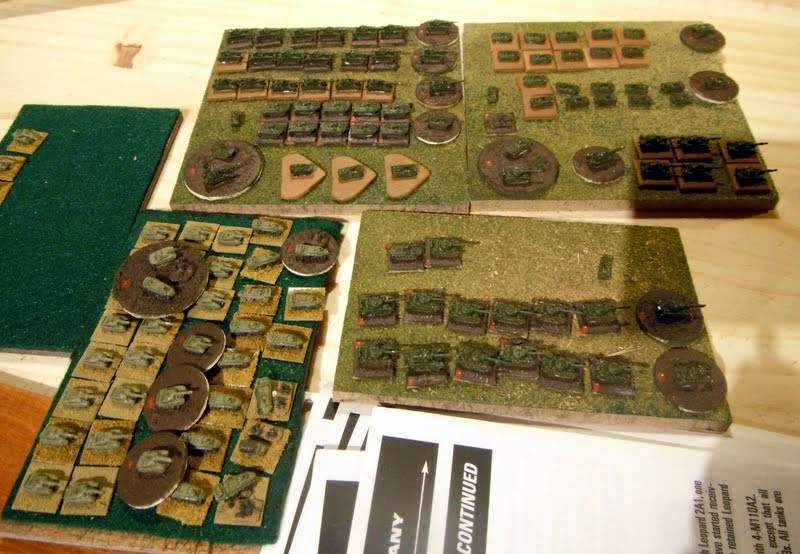 
Using the terrain board I established the following scenario:

A major Soviet offensive is under way in your sector.  Plans to defend along the Teugen bluffs West of Kleinstadt were abandoned when the Brigade defending to your North was shattered  leaving your flank threatened.  This has resulted in the decision to withdraw to a new defensive line along the Wasser river in vicinity of Machsnichtstadt.  A major push is expected in your sector in the next 18 hours.  You are to defend the ridge west of the Wasser and prevent any crossing. 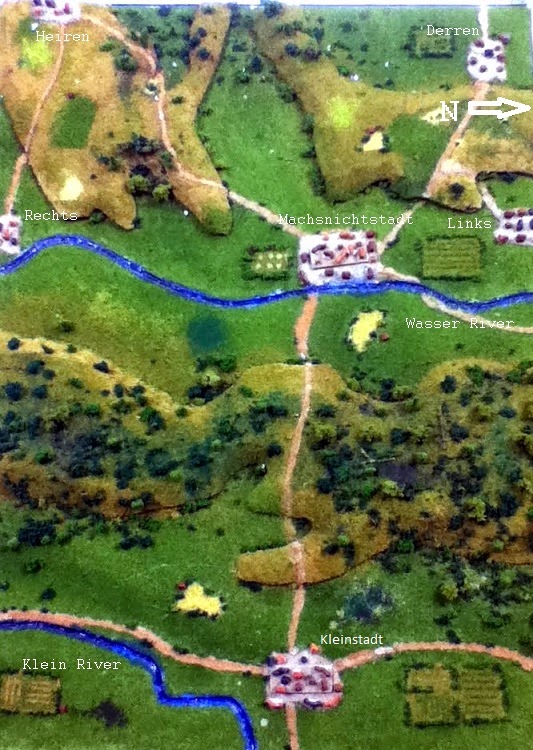