I finally finished re-basing all of my 15mm Samurai (48 total units) and celebrated with several games Samurai battles.  (Some Solo and some with the help of Mini-Me) I/We played through all five phases of 4th Kawanakajima as well as the first Domyoji battle.  It took a couple days, but all of them proved to balanced scenarios with the Command and Colors rule set.  For the two games with my son, we modified the rules with the following accommodations:


Of the battles, the Heights of Komatsuyama produces the most interesting dynamic with the struggle for control of the heights causing 1 VP to go back and forth between the two sides at the end of each turn.  The battle at the Ford causes a similar issue with the need for the Uesegi to keep a response force to destroy any Takeda unit for crossing the river and remaining through the Uesegi turn.  Overall fun games, and I am addicted.

I took the opportunity to also paint some Ashigaru archers to replace the Sohei and Samurai archer stands I have been using.  They were in a bag with my leftover Minifig Samurai figures so I also did a unit of Sohei swordsmen to finish off the bag. 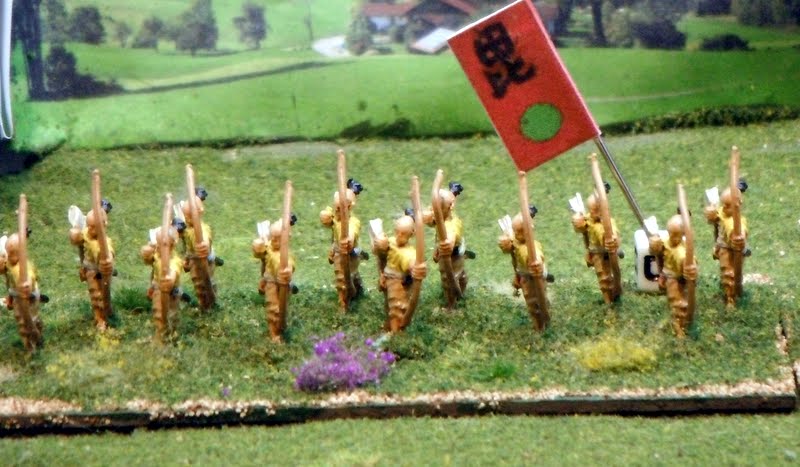 I admit to being less than impressed with these old sculpts.  They were great over a decade ago when I had less disposable income and options were slimmer.  Compared to my Dixon sculpts they look a little too simple.  The lack of Sashimono also really stands out for later Sengaku period games as well.  I will probably start replacing them with Two Dragons/Peter Pig/Dixon as time allows.

Now that all of my units are set on their 2"x 4" bases I really like the look of the army.  I am considering moving all of my 15mm figures to this scheme.  The stands have the right look, heft and figure density.  Perhaps I will try my ACW collection next.


I also need to start looking for a good ruleset for playing games with more than two people.  I have my Nephews and Brother coming over for the holidays and the CC rules are really a two person affair.  My son has also entered the "can we both be on the same side?" phase.  I just picked up Rally Round the King from 2-Hour Wargames to give it a try.  I know the rules are supposed to allow for solo and collaborative play, so I'll see how it plays out.