November 14, 2012
The knights came on at the gallop, their lances leveled   With a crash and a terrible bellow knights and beasts clashed.  A great blue beast reared up from the skeletal mass and charged the Knights Templar. Flame erupted from his terrible maw, and his claws tore into Knight and Horse alike.  The skeletal hordes made one last desperate push to force the breach in the wall, and the last defenders of the village were overrun.

The King rode towards the breach in his walls.  He heard the terrible roar and saw his soldiers pitched left and right.  One of the great beasts had made its way inside.  He angled towards the fight, but saw a strange banner fluttering along the wall.  A skeletal warrior in royal regalia was chopping his way towards the defenders of the gate.  The King signaled to his guard to attack the dragon.  He would deal with this warrior.

Sword and shield sang as the two warriors sought advantage.  The King feinted a stroke with his sword and smashed the creature with his shield.  The warrior reeled backward, and the king raised his sword for the finishing stroke.

Two skeletons interceded, catching the king momentarily off-guard.  This distracted, the Skeletal Knight lept on to the back of a black dragon.  The creature leaped  into the air a sped Northward.  All across the battlefield, skeletons began to crumble into dust.  The remains of the army disintegrated before the disbelieving eyes of the surviving defenders.

It was over, for now, but would they ever come again? 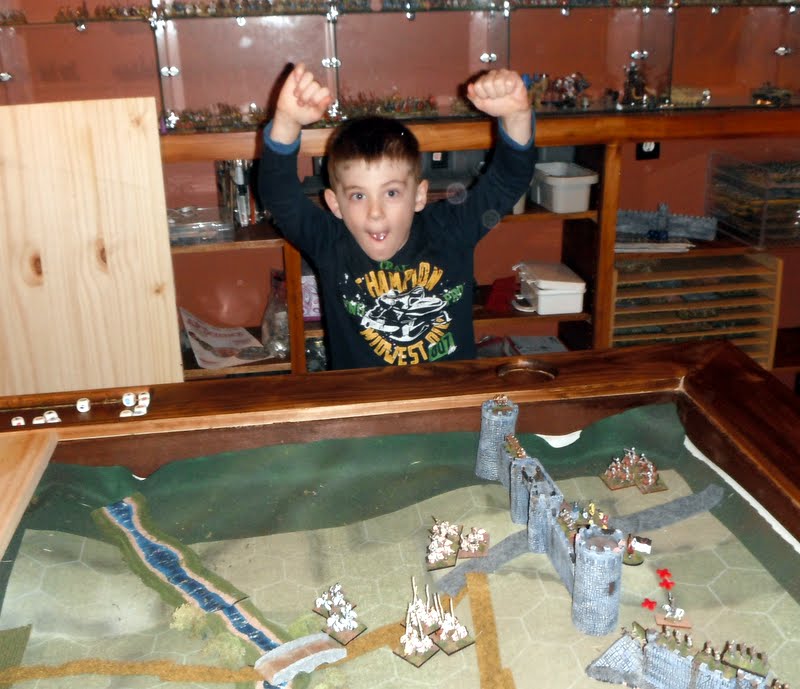