Remember when games were just about fun? 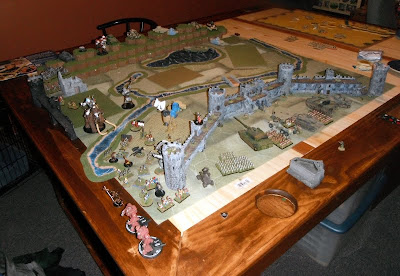 The other day I entered the den to find this waiting for me.  My son had pulled out every miniature and toy he could find to make the most epic battlefield he could imagine.   The battle contained an array of all possible scales and genres.  Stalwart English men-at-arms stood abreast Fallschirmjaegers, Battlemechs and Dragons.  I was trying to figure out what 'rules' we would use when I was forced to remember just how awesome life was when I was younger.  To my older self this is a mess of continuity and scale.  To my younger self this is insanely awesome.  We made up rules, rolled dice and created a narration.  In the end joy defeated reason 7-4.


In playing stuff with my son, I realize why I am  attracted to games like Command and Colors.  The quickness and the simplicity of the game allow for fun games.  When I think back over the years to rules debates, dickering over modifiers, or arguing over measurements, I am amazed at what a waste of time it was.  Part of the reason I gave up games like WH40K and Battletech was the realization that I would become a competitive jerk without noticing (especially as those around me were going down the same path).  It hit me during a discussion over High School sports today:  We tend to forget that playing games involves the concept of "play" and "game."  Both of which are supposed to provide diversion from/ and release of stress, not facilitators of stress.

Getting away from philosophical meanderings, we also played a game of CC:Kids recently using some of my Crusader forces.  Norman knights defended their camp from Arab raiders.  This game saw the advent of the "super unit"  2 units of Heavy knights grouped together with a general model to run roughshod over the battlefield.  They roll 8 dice together rather than 5 separately as throwing a fist full of dice is significantly cooler.  The Normans won 6-3 when the game was called on account of bed-time. 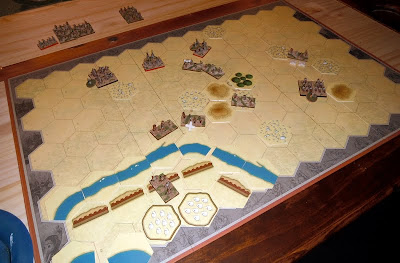