Command and Colors for kids ver 1.5

October 04, 2012
I got home from work yesterday to find a game set up downstairs.  I recently purchased Zvesda's "Samurai Battle's" with its Command and Colors rule module, and the boy found the tiled hills and wanted to have a go. 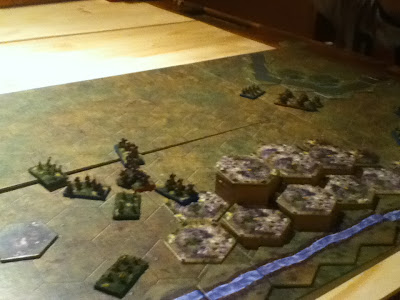 Since the board was not divided into flanks (I was to advance along the length of the board)  He decided we should roll dice for movement instead of draw cards.  We rolled for number of command dice:  he rolled a 5, I got a 4.  Here were the rules: 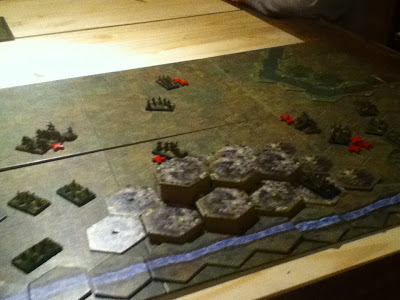 I launched my attack up the middle as he sent a strong flanking attack against me.  I was virtually unable to roll a green the entire time, so my Cavalry did most of the work.  It was a close game.  I savaged his center units as his flank attack swept through my immovable skirmishers.    It was 6-6 going into the final turn as my medium cavalry launched an attack against his super unit.  You can probably guess the results....