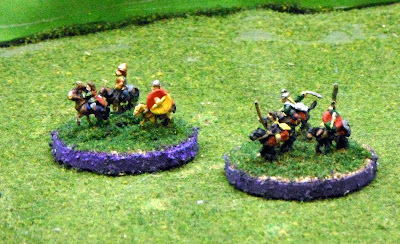 Here are the leader stands and cavalry.  I did two stands with just mounted leaders and four stands with my extra Chariots.  I figure this way I can use the Chariot stands for the traditional 'Britania' Celts and the other for a generic "European Barbarian Horde" army to fight my Julian armies.

The Chariots were posted long ago, but I changed up the basing to go with the new army.

Finally I broke up the cavalry to form 2 medium and 1 heavy force.  These will also do double duty as auxilia /allied cavalry for the Republican Roman army.

I have 2 more units of cavalry completed awaiting a resupply from Litko to join the rest of their brethren.

In painting this army I tried to limit myself to on a few colors and patterns, and rely on mixing up the miniatures to get a good 'barbarian horde' affect.  I have been experimenting with Army Painters new warpaints of late and like how these turned out.  I glued five strips of infantry or three of cavalry to each stick and then primered in one of four colors:  Leather Brown, Rat Fur, Skeleton Bone (cavalry only), and Uniform Grey (cavalry only)  All the horse furniture was done in Soft Leather".  For the shields I stuck with Flat Red, Yellow, Flat Green, Flat Blue and Unbleached Wool.  I like the overall affect, but the time required was significantly greater than most all of the ancients I have done in the past.
6mm Ancients Baccus Enemies of Rome