Forward Observers and Such


In addition to the command stands, I experimented with some support elements.  I am still undecided as to whether I want to keep these separate elements, however.  For the most part, fire support elements and shoulder fired air defense missiles (MANPAD or SHORAD)  were integrated into units at the company level.  (As an Armor Company XO I would often have to receive and integrate the lone Stinger team and fire support team vehicles sliced to my company during operations)  I am starting to lean towards integrating these functions into the HQ stands and the recon stands for the level of operations I want to wargame.  I could then treat special elements like snipers and COLT teams as recon assets.

Another trial run I am trying is to base my APCs on smaller stands and team them up with dismounted infantry stands.  The basic concept is reflect their role as combat taxi rather than infantry fighting vehicles.  Thus M113s, BTRs, Fuchs and other similar vehicles act as armored carriers, and not as separate combat vehicles.  Bradleys and BMPs continue to act as the IFVs and are based normally. 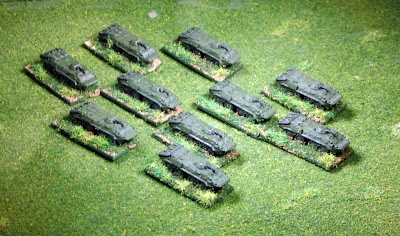