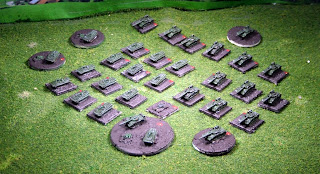 As I mentioned in previous post, I have a small collection of Irregular Miniatures 2mm modern tanks I use for scenario development.  I can reduce the ground scale from 1" =125m to 1cm=125m and thus use a much smaller play area to test out a scenario.  I built a BLUEFOR and an REDFOR set using M1s and M113s on one side with T72/BTR60 on the other side.  The irrgular sets also came with some small AT guns, Trucks, Jeeps, Infantry and artily (M109/2S3 and Towed Pieces)  The problem is that I never really liked how they actually look:
﻿﻿
﻿﻿

Then I saw picoarmor the US supplier for Oddzial Osmy 3mm modern AFVs.   I really like the quality of the sculpts for the scale, and was tempted to swith as I could actually mount proper platoons on my platoon stands instead of single 6mm vehicles.  This madness was ended abruptly when I looked at my existing collection of several thousand pieces of 6mm armor and realized what I was really proposing....

That said, I did order some their 3mm buildings to build some German villages for my Spearhead games, and opted to try out some of the modern strike aircraft that I have already posted.  I figured what the heck, lets replace the Irregular set with some fresh, new stuff and ordered some new OPFOR and BLUEFOR vehicles.  I settled on my current favorite modern arena: central Germany.  That means Green Soviet tracks and some West German opponents.  For the initial order I got a pack of T-55s, T-72s (I know, should be T-64s, but I still want Generic use.  oh and they a frippin tiny anyway.) , and a  BMP-1 w/Infantry Pack.  That is enough for 2 MRBs, and 4 Tank Battalions  with command stands.  I figure I can still use the Irregular BTRs until I get around to replacing those to.  These are just for test games, so I need to resist my completist impulses.

I took the opportunity to also try out some of GW's new paint range, particularly the textured basing material.  Here is the 1st T-55 battalion: 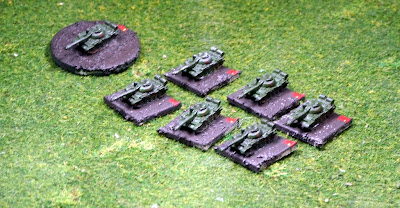 They are basically painted Russian Green with a wash of Devlan mud.  The tracks were picked out in Rust and the any optics/maschine guns in a gunmetal/black mix.  I added a single red spot to each turret to give the impression of a Soviet Star.  The basing material requires at least two coats to get enough texture to look passable.  That is something I have seen repeated in multiple reviews, and can only echo my assent.  I highlighted the stands using one of the new Drybrush paints (Longbeard something, I think)  it is definately a dry brush paint, however I found it tricky to get the consistancy to where I wanted it.

You get 15 tanks in a $4.00 pack which I used to make 2 Modern Spearhead WARPAC Tank Battalions with command stands.  The extra tank will go on a Brigade command stand with a BMP. 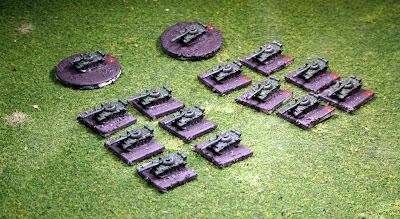 The same procedure was used for the BMP-1s 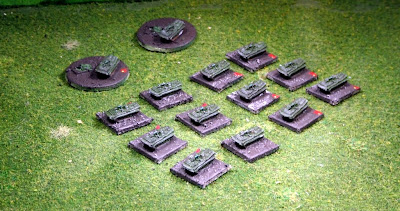 The T-72s were done the same way and round out the force.  I sent in a second order to get some T-64s, more BMPs, and some basic BRDM-2s I can kitbash into any other supporting vehicles I need.  The goal is to be able to reflect a Mechanized Rifle Regiment or Tank Regiment plus some supporting assets.  I am gong to continue using some of the basic 2mm minis like the AT guns and field pieces.

One important note on these minis worth repeating:  The metal is very brittle.  Flash tends to snap off, rather than bend, and one of the West German Leopards I purchased had the barrel and mantlet broken free.  That makes customizing difficult as they don't sculpt well.