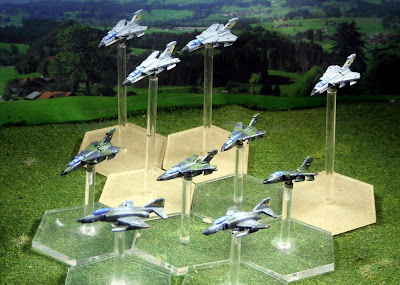 My own personal Luftwaffe.....

I went ahead and ordered some more picoarmor 3mm Aircraft to add to my modern collection.  I also went ahead and got enough 3mm Tanks and PCs to build a Panzergrenadier Brigade and Soviet MRR to replace my Irregular 2mm "test figs"  More on those later.

I decided to go with a mixed bag to look at how these jets hold up.  They paint very well and have just enough detail to keep a sharp appearance at this scale.   First of all, I finished painting the USSR Strike Aircraft collection:


I tried a 4-color camouflage scheme I found on-line, and while it doesn't look great up close, it works really well at the gameboard distance.  The tactical markings are the same way.  I have gone with an impressionistic approach that gives the general idea at a distance.  I think it works quite well.

To add to the Soviet side I purchased a pack of 8 MIG-21s and 8 MIG-29s.  The MIG-21s I split between Egyptian and vintage soviet:

I've only painted up a pair of the MIG 29s so far, but they are one of my favorite models from this range with crisp detail.

Facing off against Soviet Frontal Aviation are the stalwart defenders of the BRD:


And just to add an upgraded touch, some Eurofighter Typhoons.

I have never really played any modern air combat games, and I bought these primarily as strike fighters for Modern Spearhead.  That said, I am tempted to get more just for how pretty they look laid out across the board.
3mm Air Power Cold War picoarmor USSR West Germans