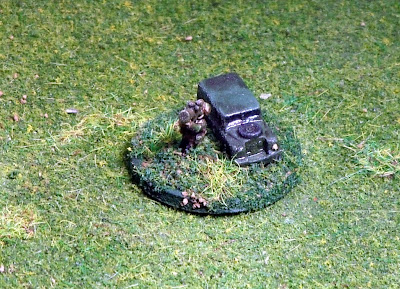 I am still experimenting with new basing schemes for my moderns.  I have pretty much settled on round bases for Battalion and above headquarters, and want to do the same thing for Air Defense units, forward observers and possibly scouts.  To that end, I just finished re-basing my BOAR and West German SHORAD units.  I tried to do the standard British camo pattern with little blotches on the uniform, and think it turned out all right. 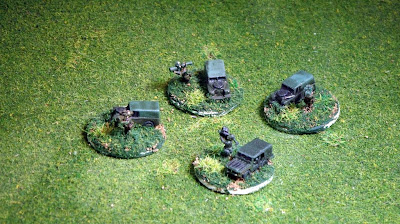 I am building up a British Infantry Brigade to go along with my two armor brigades, and wanted to make sure the blowpipes had a chance to shine.  That said, I am becoming more interested in the Cold War Commander system of assigning MANPAD units like these to the command stand as it really makes more sense.  You never really have the missiles clustered together in a platoon, they are normally spread out to the companies to provide self defense.  (At least all the units I was supported by did it this way.)

In the front is one of by German Stinger teams: 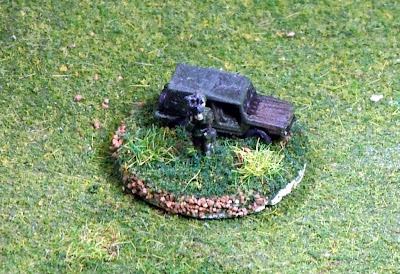 This is just a GHQ US Army Stinger model painted in a more grey-green scheme.  I have several packs of GHQ's Third World Regulars painted up to represent the Bundeswehr as they are at least equipped with SLR/G3 looking weapons.

Finally I have a motley collection of Rapier carriers.  I think these are a mix of H&R and maybe Scotia.  I am really spoiled by my GHQ figs, and figure these will have to be replaced as well. 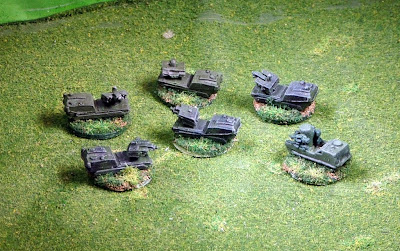