With the rapid turnaround from Picoarmor my West German 3mm Panzer Brigade is now complete.  The above configuration has 2 Panzer Battalions, 1 Panzergrenadier BN, and 1 Mixed BN with a company of Leopard 2s.  (Upon closer inspection, I think I should have used 6 Marders in the Panzergrenadier BN for this formation rather than 4 Marders and 3 M113s)

I have the recon elements (Iltis and dismounts) painted, but I am still looking at basing options.  I am thinking about using ovals or triangles to make them easily recognizable.

The first of the supporting BNs, the divisional Jaegers is close to being done: 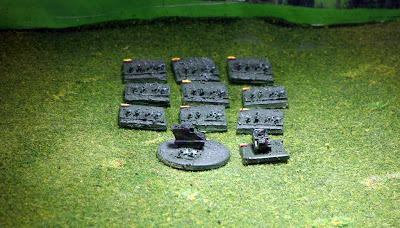 I still need to get some trucks and a Milan stand to make them complete.  The minis are done for a recon Battalion, but they too are waiting on a basing decision.

Doing moderns in another scale was not exactly something I really set out to do this year, but I admit that painting these little things is pretty fun.