Bundes -where? I don't see them. 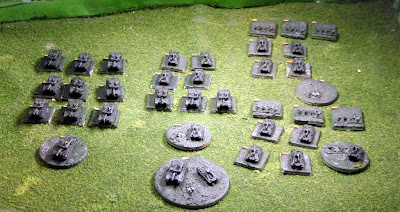 To go along with the Soviets, I also ordered some West German Armor from picoarmor.  I have to say that picoarmor is a fantastic webstore and their service excellent.  I have ordered from them three times now, and I have received my order in three days or less.  Communication is excellent, and the free shipping for orders over $25 is a refreshing savings in a world that seems to view postage as a means to increase profit margins.

Now on to the minis.  For my first set, I painted up a 80's era Panzergrendier Brigade with Leopard 2s and Marders.  I just received my follow up order for some more figs that I will use to add a recon Battalion, Jaeger Battalion and a second Panzer Battalion to use the unit as  Panzer Brigade instead.

Like the Soviet miniatures I based these on cardboard counters from an old bagged-game and used GWs new textured paints for the basing.  I added little West German flags to help with recognition.


Finally here is one of the Panzergrenadier Battalions.  I purchased one of the Marder 1A2/Infantry packs.  I am using the infantry strips as place holders for the three M113 stands.  When those are complete, these stands will be consolidated with the others to form the Jaeger Battalion. The add-on figures have already made their way to the painting sticks,  The paint scheme for these figs:
Basecoat  - Russian Green
Camoflage - German Black Grey and Chocolate Brown
Treads/Weapons - Mix of flat black and brass