April 21, 2012
More Battletech Nostalgia.  This time the models are from the Boxed Sets that I received while deployed overseas.  I had placed the boxed set on my Amazon "Want List" prior to the deployment and was surprised when a copy arrived from my Sister-in-Law. I was more surprised a few days later when a second copy arrived from her husband.  Apparently they both decided to get me a copy and hadn't mentioned it to the other.  I had shipped several of my paints over to give me something to do with my free time.  (I learned on my first trip to Iraq that I could only play so many video games.)  I primered these using the Tan and Black spray paint we had available down at the motor pool, and decided I would do them up as some of my favorite factions from the early Battletech novels and sourcebooks.
To go along with these I did some as the 7th Crucis Lancers, the Raider's parent unit. 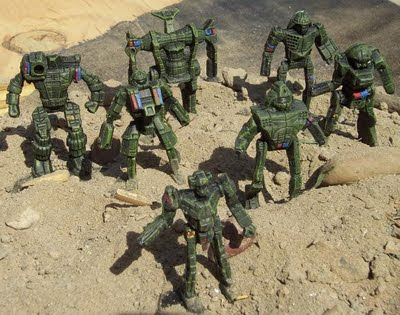 For my primary antagonists I decided to do the Kurita Sword of Light vs. The Kell Hounds.  I had a good strong red, and figured that these would paint up quickly and cleanly,

After returning home I opted to finish the mechs and expand the contingents  a little bit, mostly by adding some old Plastech mechs from the earlier boxed sets as well as some other models in the "I've been meaning to paint those" collection. 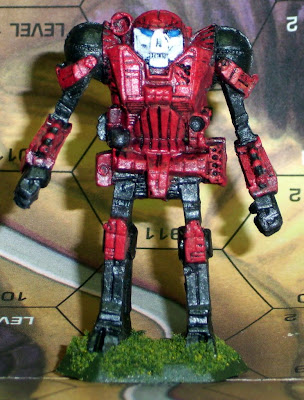