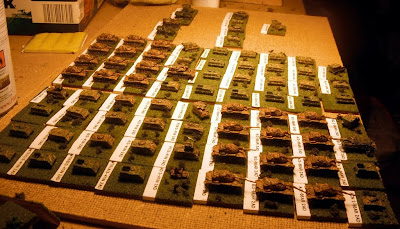 I started painting these figures years ago, and never got farther than two colors.  Dusting off the World War 74' stuff inspired me to go back and actually finish the MERDC schemes that give them that Able Archer 84 goodness they deserve.  There is something about MERDC that just brings back the Cold War memories. (That and models like the M114 Scout vehicle and Sheridan light tanks.)

This unit was prompted by some trades I did for some used microarmor M60s that had a brown and green scheme.  I had enough to build 2 Armor Battalions under the Modern Spearhead MTOEs.  Thus the ID of building the 2AD Forward for the Cold War gone hot scenarios.

I chose the 2AD unit primarily because I already painted an Armor Brigade from the 3rd Armor Division from the V Corps area with M1IPs and M2s.  That and the unit was up in the NORTHAG zone and I could pair it with my BOAR Chieftain/FV432 Armor Brigade.  (and I would have the opportunity for building Dutch and Belgian units when I decided to go for it...)


These were based when I still thought it would be a good idea to stick to the Modern Spearhead basing scheme.  Since then, I have realized how much of a pain all the markers and stands really were.  I have since decided to base all command, mortar, recon and air defense units on round bases.  That makes them easier to ID and I think better reflects their assigned roles.


Another change I am making is to do infantry stands for all the dismounts (like in Cold War commander), and take all the BTRs, M113s and other APCs off the stands.  The IFVs like the BMP and Bradley are true combat vehicles in their own right, but I think having carriers mounted as platoons doesn't reflect their role very well.  As such I plan on just placing the carriers on the INF stand to represent when they are mounted/protected.

Overall, I am happy with the paint scheme, but I think I need to try more Summer Verdant schemes for the next unit.