In addition to ordering a few Winged Hussars in my last Baccus order, I also grabbed a bag of the new Norman knights.  Baccus is supposed to be releasing a new collection for the 1st Crusade, including the Arabs, so I wanted to see if I would like the figs.

These are great sculpts and come 45 to a bag.  Baccus will allow you to customize the mix, so I got these with only 2 command strips.  That's enough to make seven stands with three left over for later command figs.  That way I can do two units of three for Warmaster type games and one unit of six for Field of Glory. 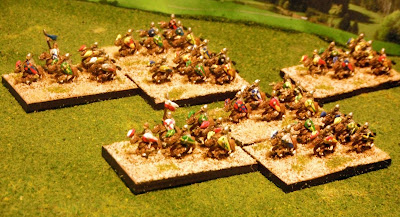 I've tried a new mix of gravel to get the desert bases I wanted.  I am aiming for something sparse but with enough visual interest to set off the paint schemes. 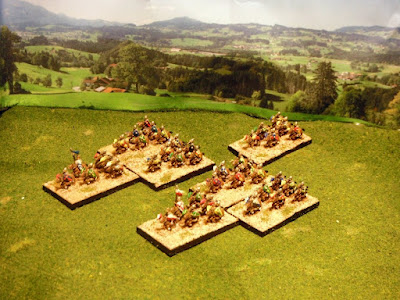 With these done, I really need to buckle down and get some Napoleonics done....
6mm Baccus Crusades Medievals Normans