January 19, 2012
I found these pics on an old hard drive the other day, and thought I would share them.  I ran an early war North Africa battle using Spearhead back in 1998-9 at the now defunct GameFaire in Spokane Washington.  The battle was between an Italian mixed forc﻿e  attempting to delay the British advance.  And relieve an infantry battalion cut off in one of the towns.

My gaming group back then had been playing a lot of WWII micro armor, primarily using the old "Tank Charts" rules.  We had a massive upheaval in our gaming after I was exposed to Arty Conliffe's Spearhead rules in the gaming attic of the sadly long departed Wally's World of Hobbies in Pullman, WA.  Here finally was a set of rules where a single Tiger or Panther tank didn't dominate the entire table.  Maybe, just maybe the Italians might be able to field a force on the table....

With that inspiration, I began collecting an Italian armored command and setting up the scenario to deploy it.  I have recently repainted/re based many of these figs and really need to take some new pics.  The infantry stands are from the old GHQ squad stands which are just a sold block of soldiers.  Up until this point we had always just used card counters to represent infantry, and these were the first infantry models to be used in one of our games.

Here are some views of the battle:

Here a Bersalageri BN defends the town.  All of these urban stands were custom made, with removable buildings in the centers to place stands.  I am still annoyed that someone decided to relieve me of the box that held them while I was setting up for another game.  I hope they at least got some decent use on their table.... 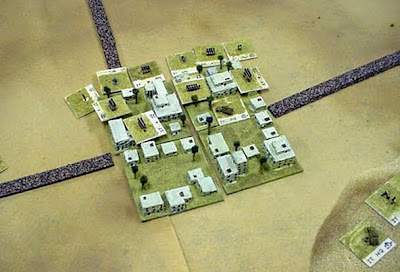 Most of the details of the game are lost to time now, but I do remember the endgame with the arrival of the British Matilda IIs.  They always make for an interesting game with their ability to withstand most anything the Axis throws at them (excepting the 88 of course), while simultaneously being unable to harm most other tanks with their dainty 2 pounders.
6mm Battle report British GHQ Italian Spearhead WWII