January 18, 2012
I have been intrigued by the Russian decision to embrace the Brigade Combat Team model in their modernization.  The initial announcement was followed by a significant cut in the number of Field Grade and General Officers as they move towards a contract (re: volunteer) force.  The most recent article I saw indicated they are essentially doing away with the traditional division models with the exception of a tank division along the Chinese border.

I have been looking for an excuse to collect T-90s and BMP-3s and here is the perfect excuse.  I prefer games at the operation level (i.e. 1 Model = 1 Platoon) particularly Modern Spearhead.  After some discussion on the Spearhead discussion group I settled on the following MTOE:

2x Tank Battalion (1 Attached upon mobilization, may be broken up to the MRBs)

1 BTR/BMP (HQ, I don't like using tanks to represent BN HQ as there are usually a lot more other armored vehicles in the HQ element and only a couple of tanks)
5x Tank Co w/ 2x T-90 each

Big thank to Mark Bevis at Micromark for his input on these formations.

With that here are my first additions: 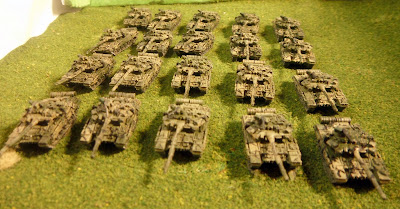 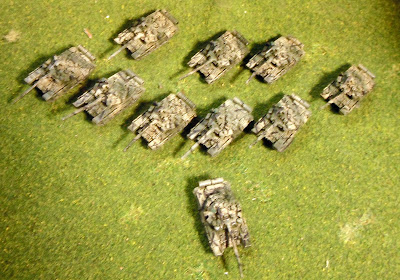 2 In Service Mini BTRs to act as Tank BN HQ

1 SPAA BN using GHQs new SA15 models.  I know they aren't on the MTOE but I really liked the new sculpts. What better reason do you need?

Part if another SPAA BN with 2S6 Tanguska. The CinC model is pictured at Right to show the difference in sculpts. The Radar is a bit fiddly and one has already made good on its escape.

All of my SA-8s are already painted and based for my 80's era Tank Division, so I chose the SA-13 models instead for the other SPAA BN.  All told I think I have more than sufficient ADA to keep most of the Bandits off of me.

As I mention, the TOS-1 is just a fantastic looking scultpt.  That, and it is the closest thing to a futuristic Sci-Fi vehicle in use barring the deployment of the BTR-T.

And finally some Recon and support assets in the form of 2x CinC BRMs (one which is going to end up becoming a PRP for an FA Battalion) and a BRDM-2 to finish off the recon element.  The one in the back will act as a CBRN recon element I suppose.

Next up I need to photograph the 3x BMP-3 MRBs. If you've noticed the lack of basing, that is rather intentional. After mounting most of my early collection on 1.25in bases with labels, I've come to the conclusion that I need a better way. The existing system is

I never liked the 1.25" squares for my infantry stands and have already switched to 1.25 x .5" stands for them.  I also prefer to base my command figs and air defense units on round bases for easy identification.  I am seriously considering moving to using Rare earth magnets on the bases and the figs to make them more modular.  That way I only really need a couple hundred nicely flocked bases to support everything. This also make the collection more resistant to my wanting to change base types.