January 21, 2012
Some more recent GHQ sculpts, this time to update your US Army forces to the 21st century. 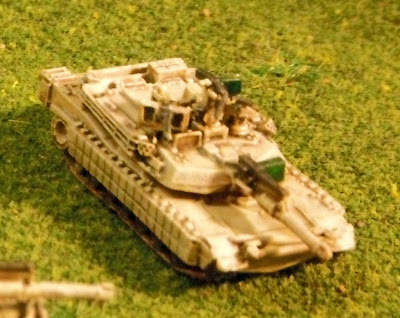 In this case their M1A2 TUSK upgrade.  I was really happy with this one as they mistakenly packed 5 instead of 4 in the blister they sent me...  Also, it matches very nicely to the first one of these monsters I saw parked in a COP near Sadr City back in 2008.

Assembly is moderately easy, with the two weapons stations requiring tweezers and patience  to set in place.  The picture shows an obvious mold line, which I admit to missing until after the dry-brush.  Ah well.  I have four more on the painting block to get this right.

Most of my models lack any tactical markings.  This is partly from my desire to get the majority of the unpainted stuff painted, and also from my own reluctance to settle on the MTOEs.  These were painted up based on my experience from my latest deployment where we removed all of the tactical markings from our vehicles in the city.

The other models I finished were the M-ATVs.  I think these are the only MRAP variants I haven't ridden in or even seen.

They appear grossly out of scale if you are unfamiliar with MRAP style vehicles.  It is easy to mistake them for slightly larger M1151 HMMWVs, but they are closer to the big Internationals (MaxPros) or RG31s in scale.  An easy to assemble model, with deep lines to really accentuate the details.
6mm Cold-War Commander GHQ Microarmor Modern Modern Spearhead US Army