All the focus on skirmish games like Rangers of Shadowdeep, Zona Alfa and Fallout means a need for various monsters and creatures for incidental contact.  I focused primarily on getting all of the science fiction inspired beasts done, with a few fantasy types as well.  The miniatures pictured above are a pair of 'cyber dogs' from Brother Vinni miniatures inspired by Fallout 3.  Useful for games like This is Not a Test and Fallout: Wasteland Warfare

Speaking of which, I also finished a set of Gouls and Glowing ones from Modiphious.  As with most of their Resin kits these are rather expensive for a horde type unit.  For the most part, these figs are getting table time for Zona Alfa.   I went with a mix of greens and yellows for the "Glowing Ones" 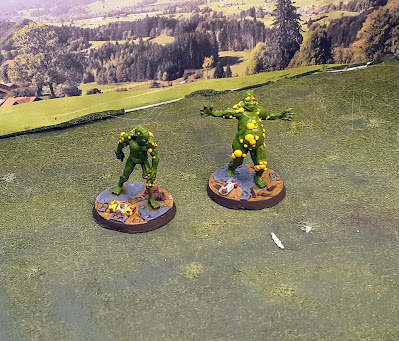 For the ghouls I did a base of AP Barbarian Flesh with dark brown wash rather than the normal flesh wash.  I highlighted them with Necrotic flesh as well. 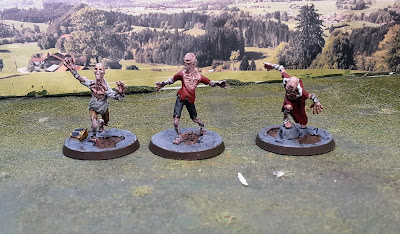 For those looking for a more affordable alternative, I found these "Irradiated" figures from the Nuclear Sandlot collection over at Brother Vinni.  I used a a darker tone on these, and they came out significantly less pink than the Ghouls.  Again, they are mostly getting table time with Zona Alfa. 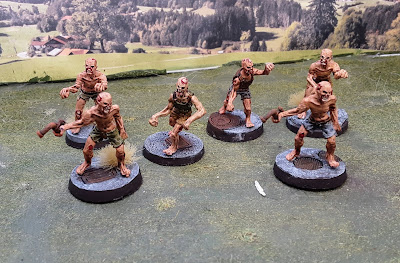 On to the critters, I found these old GW Wolves in the bits box.  I think they started out life carrying goblins, but they work well as a feral pack for either Zona Alfa or Rangers of Shadowdeep.  I did these with the a more intense highlight to have them match up with the figures I painted for this collection back in the 90's. 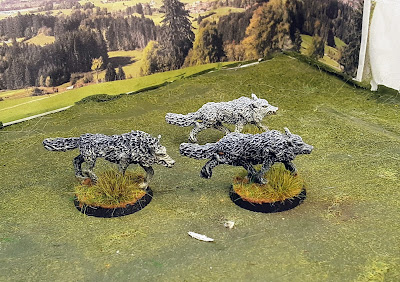 I found this alligator miniature as part of the Reaper Bones or similar collection done in clear resin.  I did these solely using GW Contrast paints to see how the swamp water effect would turn out.  Still hasn't hit the table, but maybe for Ghost Archipelago? 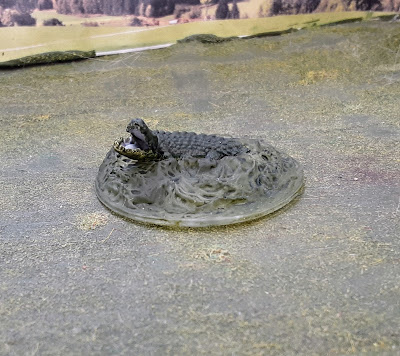 Along the same lines are another pack of Raptors to add for Ghost Archipelago.  Although, they can work in a pinch as pests for Zona Alfa I suppose. 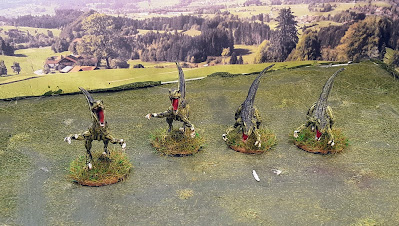 Finally, a pair of Giant Scorpions from the Reaper Bones collection.  Because, how can you complete a post apocalyptic collection without giant scorpions.  (Now I just need a Jan Michael Vincent on Motorcycle figure.)     For these I went with a base black undercoat and then built up the color using a mixture of rust effect pigments.  It was a different approach than I normally take, but I really like how the effect turned out on the final product. 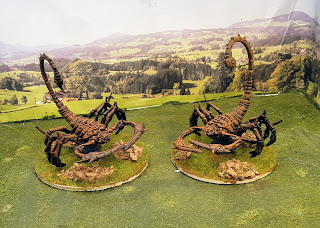 More historical figures waiting in the wings for an update, I am just really behind in basing.  I added several new figures to my Landsknecht collection as well as a horde of 10mm ACW Union Infantry.  The difference now is in my approach to painting these mass formation type miniatures.  Rather than painting by unit, I am painted several with similar paint schemes at a time.  The plan is to wait until I have all of the Landsknecht infantry complete and then combine them at random to get that nice patchwork effect with the explosion of color you tend to expect with Renaissance pike men.

I am taking a similar approach with my 10mm ACW miniatures.  For the confederates I do several blocks of miniatures in the same paint scheme, and then pull them together to form a patchwork of infantry units.  The union troops are simply being done by painting all of one sculpt at a time, and then basing them when all 200 figures is complete.

Otherwise, a lot of modern Special Forces figures and 16th Century Sohei await their turn in front of the brush.